ANCHOR BAY FILMS LEAVES YOU TWO DEGREES AWAY FROM DEATH WITH 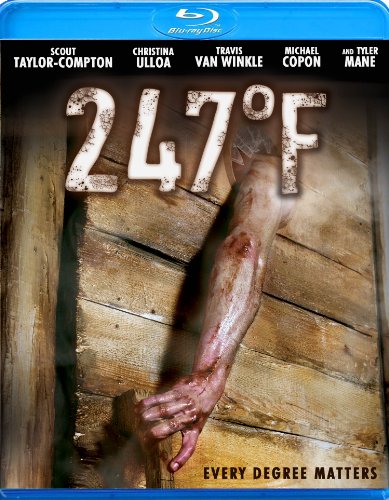 BEVERLY HILLS, CA - On October 23rd, Anchor Bay Films presents a claustrophobic horror film that gives you no choice but to sweat with 247oF

Jenna (Scout Taylor-Compton) is traumatized when she is trapped in a small vehicle after a car accident, forced to observe the mangled corpse of her fiancee in the driver's seat until help arrives. Fast forward three years, Jenna and her three friends travel to a lakeside cabin for a carefree weekend. The fun quickly becomes a nightmare when three of them end up locked in a compact, hot sauna. As fear sets in and Jenna reconnects with the horror of "the incident," every minute counts and every degree matters as they fight for their lives in heat that is quickly approaching 247oF

- the temperature when the human body expires. See Scout Taylor-Compton and Tyler Mane reunited for the first time since the Rob Zombie's Halloween films in a thriller that will satisfy just about everything -- but your thirst.

About Anchor Bay Films
Anchor Bay Films is unique in that it offers the creative community a fully integrated distribution capability on all platforms and an international solution extending beyond the U.S. Anchor Bay Films is a division of Anchor Bay Entertainment and is on the ground providing quality distribution with operations in the U.S., United Kingdom, Canada and Australia, as well as distribution capabilities in other key territories. The company focuses on a platform release strategy for its films with an eye toward maximizing their potential across all ancillary distribution platforms. Recent theatrical releases include High School starring Adrien Brody and Colin Hanks and Seeking Justice starring Nicolas Cage, January Jones and Guy Pearce. Films in its library include the critically-acclaimed comedy City Island starring Andy Garcia and Solitary Man starring Michael Douglas as well as the 2011 releases of Kill the Irishman starring Ray Stevenson, Vincent D'Onofrio, Val Kilmer and Christopher Walken, Toronto Film Festival award-winner Beautiful Boy with Maria Bello and Michael Sheen and Cannes 2011 premiere Corman's World. Anchor Bay Entertainment is a subsidiary of Starz Media, LLC which is an operating unit of Starz, LLC, a wholly-owned subsidiary of Liberty Media Corporation.