“This place has a lot of old nooks and crannies.” - Rebecca (Sarah Bolger) 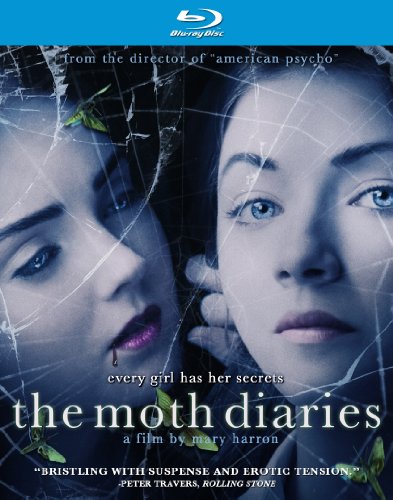 Director Mary Harron is best known for bringing the character of Patrick Bateman to life on the big screen, but we'll see if she can work similar magic with an ensemble of young, attractive, female actors here.

Filmmaker Mary Harron is still best known for helming one of the better films of the last 20 years, 2000’s American Psycho. Having only directed one feature film since the release of that cult classic (2005’s The Notorious Bettie Page), it wouldn’t be a huge surprise to find Harron a bit on the rusty side behind the camera. Unfortunately, such rust is wholly evident in her latest movie, 2011’s The Moth Diaries, based on the 2002 novel of the same name by Rachel Klein, a similar tome to the Twilight novels, which it predated. Having not read the novel, I can’t speak to what made it into Harron’s film and what didn’t but its strange editing, short running time, and numerous plot holes make it feel like large chunks might have hit the cutting room floor. IFC’s Blu-ray disc is good stuff, though, with a stellar video presentation, solid audio, and extras with more plot development than the actual film.

Rebecca (Sarah Bolger) has returned for another year at her all-girl boarding school, and is sharing a room, again, with her friend, Lucie (Sarah Gadon). All of Rebecca’s friends have returned, it seems, but things don’t seem as friendly with the school’s newest student, Ernessa (Lily Cole). Despite her loner attitude and overall strange vibe, everyone seems to take a liking to Ernessa, except Rebecca, who suspects the worse from this outcast. As her friends and members of the school’s staff begin to die, rather unconventionally, it becomes increasingly evident that Ernessa might not be what she seems.

This is easily one of the longest 80-minute movies I’ve ever seen, and that’s certainly not a compliment at all. Usually, such films are brisk, and at least somewhat interesting, but here, things are questionably edited, multiple sequences are overly long and pointless, and the film, as a whole, is just plain boring. Plus, it’s very strange how the vampiric elements that should be explicitly in play here, are almost totally ignored. I didn’t even realize that this was intended to be a “vampire movie” until I was watching one of the disc’s extras. I could be wrong, but I believe the word “vampire” is used once in the film, and that’s in reference to a book being read in class. In the accompanying behind the scenes piece, it’s mentioned numerous times. Perhaps this huge aspect of the tale was originally going to be a much bigger part of the film than it is, and, if so, this major omission is the root of director Harron’s problem.

To say that young Lily Cole is mesmerizing is a huge understatement. She, quite simply, is one of the most unique- looking actresses in modern film, with the ability to look drop-dead gorgeous in The Imaginarium of Doctor Parnassus, and, at times, terrifying here, in The Moth Diaries. As with the rest of the cast (Sarah Bolder, excluded), Cole is never allowed to spread her wings, so to speak, as everything (aside from an incredibly bloody sequence near the end) horrific happens off-screen. Such a lack of blood and guts is usually reserved for PG-13 films, and even the larger-budgeted of those push the limits of the MPAA. There’s no excuse here, as Harron has an R rating to work with, but still seemingly no urge to show anything that usually draws this genre’s target audience to such a flick.

IFC has done a nice job with this Blu-ray release, as it sports an outstanding 1.85:1 anamorphic widescreen image. Crystal clear images abound, but the real joy is in the cold, dreary color palette that’s well-rendered throughout. The audio is a 5.1 DTS-HD Master Audio track that isn’t as impressive as the video, but does sport some nice directional effects and consistently clear dialogue. The extras include an 18-minute behind the scenes piece, complete with cast and crew interviews, as well as on-set footage. There’s also nearly 13 minutes of “Video Diaries” with candid, hand-held camera-shot on-set footage that the cast compiled for this piece. Rounding things out is a 2- minute Featurette and the trailer for The Moth Diaries.