Perhaps the most terrifying human relationship is the one between a serial killer and his target. But what if it starts that way, and becomes something...more? From the visionary mind of director Jennifer Lynch comes the dark fable with a stellar cast.

A twisted tale from the director of
Boxing Helena and Surveillance 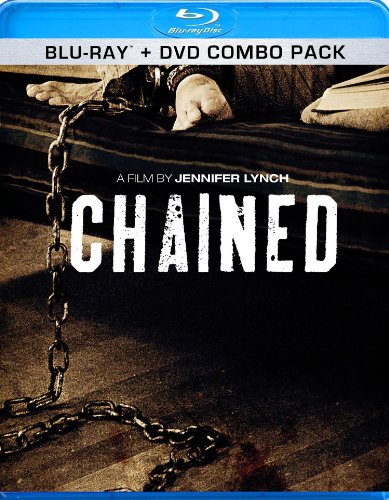 Beverly Hills, CA - Perhaps the most terrifying human relationship is the one between a serial killer and his target. But what if it starts that way, and becomes something...more? From the visionary mind of director Jennifer Lynch (Boxing Helena, Surveillance, Hisss) comes the dark fable Chained

is an unforgettable ride into the darkness that can reside in the human heart - no matter what your age. The Chained

Coming home from a routine trip to the movies, eight-year-old Tim (Bird) and his mother, Sarah (Ormond) are picked up by a psychopathic cab driver named Bob (D'Onofrio). It ends up being their last ride together. Bob murders the young boy's mother and keeps Tim as his unwilling protegee, making him clean up the mess following each murder he commits. After a couple of aborted escape attempts, Bob chains Tim - now renamed Rabbit -- allowing just enough length to move freely within the house. As the years pass, Bob starts instructing Rabbit, teaching him anatomy and human behavior. Now a teenager, Rabbit (Eamon Farren, X: Night of Vengeance) is slowly being pressed by Bob to start his own homicidal spree. Slowly but surely, he must soon choose whether to follow in Bob's serial killer footsteps or make one final, desperate attempt to break free...

About Anchor Bay Films
Anchor Bay Films is unique in that it offers the creative community a fully integrated distribution capability on all platforms and an international solution extending beyond the U.S. Anchor Bay Films is a division of Anchor Bay Entertainment and is on the ground providing quality distribution with operations in the U.S., United Kingdom, Canada and Australia, as well as distribution capabilities in other key territories. The company focuses on a platform release strategy for its films with an eye toward maximizing their potential across all ancillary distribution platforms. Recent theatrical releases include High School starring Adrien Brody and Colin Hanks and Seeking Justice starring Nicolas Cage, January Jones and Guy Pearce. Films in its library include the critically-acclaimed comedy City Island starring Andy Garcia and Solitary Man starring Michael Douglas as well as the 2011 releases of Kill the Irishman starring Ray Stevenson, Vincent D'Onofrio, Val Kilmer and Christopher Walken, Toronto Film Festival award-winner Beautiful Boy with Maria Bello and Michael Sheen and Cannes 2011 premiere Corman's World. Anchor Bay Entertainment is a subsidiary of Starz Media, LLC which is an operating unit of Starz, LLC, a wholly-owned subsidiary of Liberty Media Corporation.