"HANDS DOWN THE FUNNIEST FILM OF THE YEAR! ...Plays like a superior, and way grosser, version of The Hangover." - Aaron Hillis, THE VILLAGE VOICE "One of the funnier and more outrageous films to hit the country so far this year." - THE NEW YORK TIMES

On Blu-ray(TM), DVD and Digital Download on September 25th 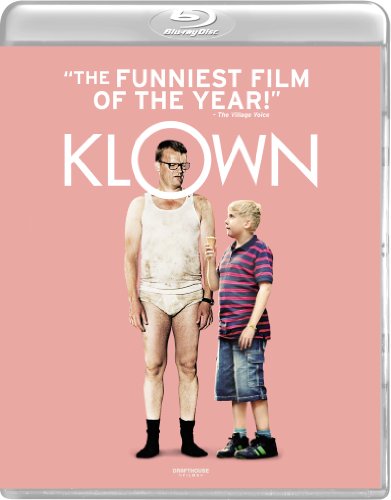 New York, NY(August 30, 2012) - Image Entertainment and Drafthouse Films prepares you for ludicrous scandals and the epitome of ridiculous behavior with Klown

. Based on the wildly popular six-season Danish TV show of the same name, this internationally acclaimed and award-winning saga of debauchery comes to Blu-ray, DVD and Digital Download on September 25th via Image Entertainment. SRP is $29.97 for the Blu-ray(TM) and $27.97 for the DVD. Pre-book is August 28th. Digital download outlets include iTunes, Amazon, Distrify, Vudu, Xbox and other digital partners. On-Demand outlets include AT&T U-Verse, Comcast, Cox and DirecTV.

follows two wildly inappropriate friends (played by celebrated comedians Frank Hvam and Caspar Christensen) as they run amok through the Danish countryside plowing through social taboos, unspeakable debaucheries and absurd sexual encounters. Misguided Frank kidnaps the nephew of his pregnant girlfriend in an eager attempt to prove his fatherhood potential, while the sex-driven Caspar is determined to visit a world-renowned brothel - only a couple of the reasons indieWIRE proclaims the movie "raunchy, fearless and awesome!"

The remake rights for this thoroughly unique property were recently acquired by actor-comic Danny McBride (Your Highness, Eastbound & Down) and director Todd Phillips (The Hangover, Old School), but here's your chance to see the unhinged and thoroughly envelope-smashing original!

through its webstore (klownthemovie.com) in unique special edition packages, including one with reversible sleeve art by famed artist and graphic designer Alan Hynes, and the limited edition Klown "Underwear Set," which contains a Fruit of the Loom muscle shirt and matching underpants for those who want to really get into the dubious behavior of the film's hapless heroes.

The Blu-ray and DVD packages also include a digital download of the film and over two hours of bonus material. Also on the site, fans will be able to download an episode of the original Klown television series written by Lars von Trier (Antichrist, Melancholia, the upcoming Nymphomaniac).

Additionally, at the Drafthouse Films webstore movie fans can join the "Drafthouse Alliance" program, which for a flat fee will bring the company's next 10 releases right to their door.
Special Features on the release will include:
* KLOWN From Behind: The Making Of KLOWN
* Audio Commentary with Director Mikkel Norgaard and Stars Frank Hvam & Casper Christensen
* "Its A Jungle Down There" - Episode of KLOWN Television Series Written by Lars Von Trier
* Inside ''Castello Alleycat'
* Crafting 'The Willie'
* Deleted Scenes
* Outtake Reel
* Trailers
* Danish Teaser Trailer
* Danish Theatrical Trailer
* US Theatrical Red Band Trailer
* US Theatrical Green Band Trailer

About Drafthouse Films
Drafthouse Films, the distribution arm of Alamo Drafthouse, debuted in 2010 with the theatrical release of FOUR LIONS and was named one of Time Magazine's "Top 10 Films Of The Year."

Drafthouse Films is dedicated to scouring the globe in search of visionary, provocative and diverse features to integrate into the ever-growing Alamo Drafthouse entertainment lifestyle brand, which along with the Alamo Drafthouse Cinemas includes: Mondo, the collectible art boutique; Fantastic Fest, the largest international genre film festival in the US; and the pop culture website Badass Digest. Drafthouse Films will distribute films theatrically and through home video, VOD and direct to consumer sales. The 2012 release slate includes Michael R. Roskam's Best Foreign Language Film nominee BULLHEAD, the internationally acclaimed comedy KLOWN, Sundace '12 favorites THE AMBASSADOR and bizarro surreal comedy WRONG, and the landmark Australian thriller WAKE IN FRIGHT. Together with producing partners Magnolia Pictures and Timpson Films, Drafthouse Films is also currently in production on the much-anticipated THE ABC's OF DEATH -- an anthology film featuring segments by 26 different directors that Fangoria calls, "a stunning roll call of some of the most exciting names in horror across the world."