“Not at all…we’ve got some Sega to catch up on.” - Madeliene (Diane Daltner) 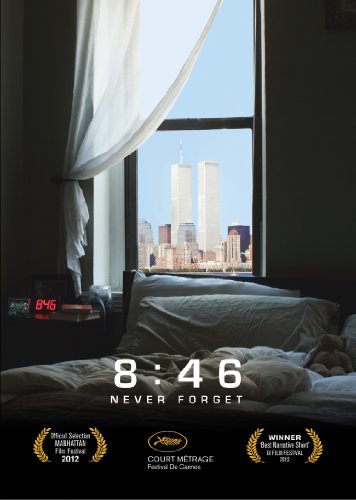 11 years after 9/11, the horrors continue to linger. Films are still being made about this unforgettable tragedy, and this certainly sounds like one of the more memorable ones.

The obscenely tragic events of September 11, 2001 have been told on film in a multitude of ways now that we’re 11 years removed from them. We’ve seen movies that focus on one of the specific flights involved in the terrorist attacks (United 93), dramatized accounts of firefighters who risked their lives to save others (World Trade Center), and even a movie that didn’t want to be seen as a 9/11 film until its polarizing twist ending (I won’t name that film since such knowledge is the epitome of a spoiler for those who haven’t seen it). A more recent depiction of 9/11 is writer/director Jennifer Gargano’s short film, 8:46, a unique independent effort that spends most of its time on a handful of people’s experiences on September 10, 2011, and their lives leading up to the horror of the following day. After playing some festivals, 8:46 gets a chance at a wide audience thanks to Virgil Films’ new DVD release.

So many lives were affected by the terrorist attacks on U.S. soil on September 11, 2001, and in so many different ways. We all know of the hundreds of firefighters who unexpectedly gave their lives to get people they didn’t even know out of the World Trade Center towers. The people we never knew and rarely hear about are the businessmen who were simply attending a meeting in the wrong place at the wrong time, or the employees of the Windows on the World restaurant who never had a chance to get out, being up on the 107th floor. These are the people whose story should be, no, must be told, as their surviving family members continue to struggle to cope with their loss, even after a decade of grief and sorrow.

Sadly, the main thing that keeps 8:46 from packing the same hefty, emotional punch of other 9/11-centric films is the wooden, amateurish acting performances given by most of the featured players. It’s far too often in one of the film’s many short sequences, where emotional heft is being built up, only to result in a thud rather than a poignant, tear-jerking moment. It’s clear that the film was shot on a shoestring budget and Gargano hired actors that are at least relatively new to the business (READ: cheap), but it’s a true shame that they are the main culprits that hold the film back from being truly great.

Gargano surely does her part in making things memorable, showing a great deal of potential as a filmmaker, and making us anxiously await her next projects. Her well-crafted story is refreshingly original in an era of film where even the slightest bit of originality is a huge plus. She could have taken the easy route and just focused on nothing but grief and sadness from the opening credits forward, but she does the smart thing and allows us to get to know each of her main characters. We actually get to know them much better than I expected for such a short film, and these close audience-character relationships are crucial in appreciating the power of the film’s finale. And powerful, it is, indeed, as Gargano knows exactly how to finish what she started, while at the same time paying tremendous respect to the countless victims of such a despicable act against humanity.

Virgil Films’ DVD brings us 8:46 in a suitable anamorphic widescreen presentation that is never flashy, but features rich, detailed images throughout. The film’s extremely low budget shows in this transfer, though, as muted colors and a bit of softness hurt the overall quality of the image. The Dolby Digital 2.0 audio is never spectacular either, but it serves its main purpose of broadcasting the dialogue crisply and succinctly throughout. The extras include a trailer for the film, along with a photo gallery. There’s also a seven-minute video about the Tuesday’s Children organization, as well as a still screen that explains that same group a bit more.