“What’s the matter with you?! Have some respect for him…for his family.” - Ewan (Sean Bean) 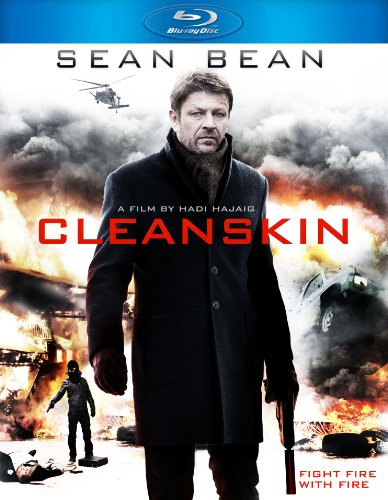 This is the film that Sean Bean fans have been waiting for, as they finally get to see him take on the action-packed role of a British Secret Service Agent...that isn't named James Bond.

Sean Bean has been appearing in feature films since he played the infamous “Hooker” in 1986’s Winter Flight. Ok, so no one has ever seen nor heard of that, but the bottom line is that Bean has been acting for much longer than many of us thought. He didn’t really become a true, international star until embodying the character of Boromir in The Lord of the Rings films, and most recently, wowed TV audiences as the tragic figure of Eddard Stark in Game of Thrones. At the ripe, young age of 53, Sean Bean is working harder than ever, with his latest being 2012’s British production, Cleanskin, which hopefully will find a large audience via Entertainment One’s new Blu-ray release, as it’s a solid, exciting action-thriller, despite some rather cheesy, misleading cover art.

Ewan (Sean Bean) is a British Secret Service Agent who is guarding an arms dealer, when he finds himself embroiled in a shootout with Ash (Abhin Galeya), a young British Muslim who has gone the terrorist route. Ash escapes the shootout unharmed, and manages to snag a briefcase full of deadly explosives that could crumble London if a terrorist saw fit to do so. At the request of his employers, Charlotte (Charlotte Rampling) and Scott (James Fox), Ewan is sent to track down Ash, and, more importantly, the briefcase. Ewan eventually learns that things, and people (Ash, included) aren’t what, or who, they seem, and this retrieval mission is far from an easy task.

While the Blu-ray box art has Sean Bean encompassing roughly 50% of it, this is one of those movies whose supposed star is only in about 50% of the movie. Instead, about 15 minutes in, the focus shifts to the Ash character (no, not Bruce Campbell), relegating Bean to an almost bit player, who seems to show up only to kill someone. Ok, so writer/producer/director Hadi Hajaig certainly has a method to his madness with the numerous Ash flashbacks, but it’s a shame that Entertainment One had to go out of their way to market Cleanskin as a Sean Bean vehicle, rather than giving it its rightful due as the action-packed character study that it actually is.

Cleanskin has some truly awesome set pieces that rival, if not best those from similar, Hollywood terrorism-centric action-thrillers. There’s also some pretty gruesome stuff, including a filmed torture scene during which we see none of the blood and gore, but hear everything that we need to, and these gut-churning sound effects prove just as effectively disturbing had blood been spraying on the screen instead. The film does have its share of visceral violence as well, including an awesome on-foot chase sequence that ends in an amazingly original head-splattering kill shot. The blood and guts even pick up more as the film progresses, and the “twist” that occurs near the 90- minute mark isn’t exactly hard to telegraph, but, overall, Cleanskin was a nice, surprising thriller that kept me involved from beginning to end.

Entertainment One’s Blu-ray disc features top-notch technical aspects, beginning with a superb 2.35:1 widescreen 1080p video presentation. Images are sharp and detailed throughout, despite a few instances of contrast issues. Blacks are always deep, colors are well-rendered, yet not especially vivid, and flesh tones are natural. The audio is a lossless, DTS-HD Master Audio 5.1 track that strikes a perfect balance between muted, dialogue-driven sequences, and bombastic, tension-packed action sequences. During the latter, some nice directional effects and aggressive bass are in play, and only add to the overall excitement, while the dialogue is always easy to understand and is flawlessly integrated into the overall mix. Unfortunately, the only extras are a 22-minute making of piece (which is actually quite good), and the trailer for Cleanskin.