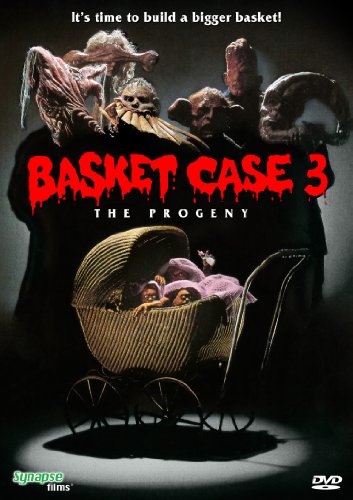 The further adventures of Duane and his malformed, formerly conjoined twin brother Belial stick in my memory as a case of director Frank Henenlotter going to the well one too many times. That opinion could change, given that it's been at least 15 years since I've seen this second sequel, but I have a bad feeling it won't.

Director Frank Henenlotter has only directed six movies in the large span of 26 years, but any true horror film fan will instantly perk up when they hear his name. Of course, even if you don't remember a single minute of these movies, it's difficult to not be familiar with them when they have names like Brain Damage, Frankenhooker, Bad Biology, and Basket Case. The more die-hard fans, myself included, know that it's difficult to forget ANY of these movies, beyond their titles, as they are as gruesome, outlandish, and (intentionally?) hilarious as they get. Arguably, Henenlotter's best film, Basket Case, spawned a pair of sequels, and 1991's Basket Case 3: The Progeny, has just been granted its second DVD release (the first was released by Fox way back in 2004), this time from Synapse Films.

Lest you forget anything that happened at the end of Basket Case 2, this second sequel begins with a bit of a recap of those infamous events. Following this brief flashback, the insanity kicks right off again, as we find Duane (Kevin Van Hentenryck) going off the deep end and wanting to literally reunite with his formerly-conjoined twin, and everyone's favorite basket-dweller, Belial. Duane thinks that stitching Belial to his side is the answer, naturally, but when Granny Ruth (Annie Ross), finds the reconnected brothers, she gets out the straightjacket and takes the entire family of freaks on a field-trip.

That's only the start of the insanity, and to describe anymore would be to rob you, the viewer, of all of the joy and bewilderment of simply watching it all unfold. All you need to know about the over-the-top, uncomfortable hokiness of this third installment can be discovered in a little song and dance number that takes place on a school bus full of the aforementioned freaks. The fact that Annie Ross clearly has no qualms about potentially embarrassing herself during this scene only helps the overall craziness and effectiveness of what Henenlotter is trying to achieve, which is closing out his most famous films on the perfect, insane note.

Synapse Films' new DVD release improves upon the old Fox DVD in the video department by presenting the film in 1.78:1 anamorphic widescreen (the old DVD was full frame). The transfer is surprisingly impressive, featuring sharp, detailed images throughout. The colors are more vibrant than ever, and the inherent grain and a few instances of dirt never distract from the overall image. The Dolby Digital 2.0 mix isn't as nice as the video, but dialogue is always crystal clear, and the music is perfectly blended into the overall mix. The only extra is the theatrical trailer for Basket Case 3.