DVD Review: IN THE MOOD FOR LOVE (BLU-RAY) 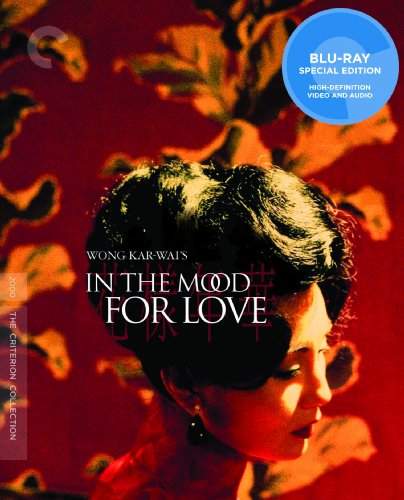 The great Wong Kar-wai's masterpiece was given the proper Criterion Collection treatment on DVD a few years ago, and is one of their banner releases. It now shows up on a Criterion Blu-ray disc, and I'd be shocked if it wasn't even more special than the first time.

It had been roughly 10 years since I’d last watched Wong Kar-wai’s masterpiece, 2000’s In the Mood for Love, and I had, regretfully forgotten much of it. It all came rushing back to me the moment that first of many slow-motion montages set to Michael Galasso’s mesmerizing score began. This bastion of Chinese filmmaking made unforgettable movies before and after this wonderful love story, including 1994’s Chungking Express and 2004’s 2046, but none is as spellbinding as Mood. Who better to handle the task of creating the ultimate home video edition of In the Mood for Love than The Criterion Collection, and, while this new Blu-ray edition contains many of the same extras as their 2002 DVD release, but there are enough new supplements and beefed up audio and video to make this a no-brainer of a purchase for the film’s huge fan base.

Mrs. Chan (Maggie Cheung) and Mr. Chow (Tony Leung) are moving into the same apartment building on the same day. Their shy demeanors and marital statuses keep any exchanges between the two platonic, at best. However, it soon becomes clear that neither Mr. Chan, nor Mrs. Chow spends much, if any time with their significant others. When Mrs. Chan and Mr. Chow finally engage in a conversation about their often missing spouses, sparks fly between the two as both can relate to the others’ loneliness and longing for attention. They plan more and more discreet meetings, always playing by a strict set of inferred rules, yet clearly developing a friendship that could seemingly develop into something more at any second.

In the Mood for Love is certainly an example of style over substance, but there’s still plenty of the latter in the mix to elevate the film into the pantheon of foreign cinema history. The central relationship between Mrs. Chan and Mr. Chow goes far beyond what could have been a typical, one-note, will they or won’t they struggle. Instead, Wong Kar-wai tells the tale of two people who are clearly falling in love, yet are hamstrung by their culture and era, to the point of simply being unable to act on their feelings. Depicting such a struggle is extremely risky for a filmmaker, as the audience’s frustration in the protagonists’ actions is often a turn-off. Therein lies the secret to In the Mood for Love’s success, as such risks, both with the story elements and the overall look and feel of the film, reap such great rewards that results in a film that has stood the test of time, and should continue to for decades to come.

Music, and lush, vivid colors are staples of Wong Kar-wai’s films, and never have both worked in greater tandem than here. Red is the most prevalent color during In the Mood for Love, and this 1080p transfer, shown in a 1.67:1 aspect ratio does right by Kar-wai’s vision and cinematographers Christopher Doyle and Mark Li Ping-bin. Image detail is magnificent, with shadow and black levels handled splendidly throughout. The real showcase here, though is the color rendering, which allows the deepest of reds and brightest of yellows to nearly pop off of the screen. The DTS-HD Master Audio 5.1 track offers us a lossless experience that is even more impressive than the video and more than enough of a reason to make those on the fence upgrade from their DVD copy. The awesome music has an added depth and breadth, as it envelopes us across the sound field, aided by some punchy bass that takes the audio aspects of the film to a previously unreached plateau.

An excellent extras collection is included, beginning with @ In the Mood for Love, a 52-minute documentary that grants us a unique look at Wong Kar-wai’s filmmaking process, and the trials and tribulations of trying to accomplish such a feat. Next up are four deleted scenes, with three of them including optional audio commentary by Wong Kar-wai. These are followed by Kar-wai’s 2000 short film, Hua yang de nian hua. This two-minute silent film is simply a collection of images culled from old nitrate films, that serves as a tribute to the fixtures of Chinese cinema who have long been forgotten.

There’s also a pair of pieces that focus on Wong Kar-wai, including a 23-minute interview conducted by film critic Michel Ciment and filmmaker Hubert Niogret, and a “Cinema Lesson” given by Wong at the Cannes Film Festival. We also get 44 minutes of footage from the press conference that took place after the screening of In the Mood for Love at the 2000 Toronto International Film Festival, as well as a 23-minute interview, conducted in 2012 with critic Tony Rayns, who gives us excellent insight into Kar-wai’s career. Another new interview with Rayns is next, this time lasting nine minutes, and focusing on In the Mood for Love’s unforgettable soundtrack. Finishing things up are three trailers and three TV spots for In the Mood for Love.