“Sir? Is there something you’re not telling me? Regarding this mission?” - Martin Stone (Andrew Tiernan) 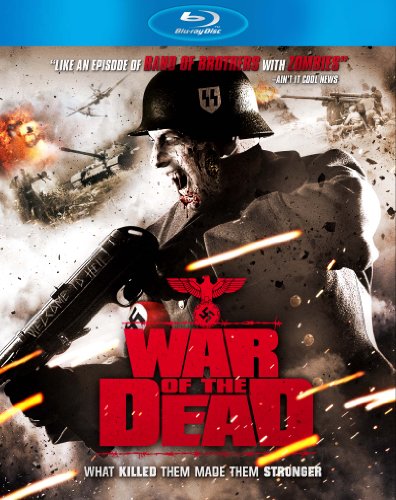 This sure seems like an interesting, shockingly original take on the soon-to-be-tired zombie film, but my gut tells me that there won't be much here to like.

When will the endless string of zombie movie madness end? Don’t get me wrong, I can watch the original Dawn of the Dead on an endless loop and I look forward to each and every new episode of The Walking Dead as much as the next guy, but with each week seemingly featuring the Blu-ray/DVD release of another spin on the zombie film genre, I can’t help but think that enough is enough. The latest of these tales of the undead is 2012’s War of the Dead, a new-ish bent on zombie invasion that puts us in Germany in 1941, as a group of American soldiers are headed to take down a secret Nazi underground bunker. They soon discover that the only thing worse than Nazis are undead Nazis, and an awful lot of punching, biting, gunfire, and blood-splatter occurs for roughly 90 minutes.

War of the Dead is far from the best time I’ve had watching the undead, but it’s also far from the worst (see the recent Dead Season as an example one of the worst). The story (as most World War II tales are) is relatively interesting and the amateur acting is never glaringly bad. The problem is that there are too many scenes that scream of a potentially great film that just never quite gets to where it could. Every time the intensity and tension picks up, we take a huge step back when the zombies attack, or an awful CGI-sequence pollutes the screen. The zombie fight choreography is rather awful, and, due to some poor costume design, we’re often struggling to tell who’s a zombie and who isn’t, bringing to mind the still-frustrating final reel of Michael Bay’s original Transformers film. Plus, when, immediately following our heroes’ narrow escape of a zombie attack, we get lines like “my Grandmother walked faster than this car” delivered in a heavy German accent, it’s difficult to take anything else in the film seriously.

Entertainment One’s Blu-ray disc release of War of the Dead presents the film in its original 2.35:1 aspect ratio via an AVC encoded 1080p transfer. This is a very dark film, with certain details being difficult to make out at times, and there’s some noise evident as well. Still, image clarity and detail is generally pleasing, with vibrant colors abounding during the less-dark sequences. The lossless, DTS-HD Master Audio track is much more impressive than the video, however, as it does a great job ramping up the excitement during sequences heavy with gunfire and explosions. A nice bass presence also helps matters, and the crystal-clear dialogue is well-integrated into the overall mix. The only extra here is the trailer for War of the Dead.