A young woman with a romantic devotion to Marie Antoinette witnesses crucial events of the French Revolution from inside the walls of the Palace of Versailles in the lavish and sumptuously shot drama, based on the international best-selling novel by Chantal Thomas

International Stars Diane Kruger, Lea Seydoux and Virginie Ledoyen Lead the Cast in the Dramatic Story of the Final Days of Marie Antoinette. Benoit Jacquot's FilmArrives on Blu-ray and DVD on January 15, 2013

New York, NY - A young woman with a romantic devotion to Marie Antoinette witnesses crucial events of the French Revolution from inside the walls of the Palace of Versailles in the lavish and sumptuously shot Farewell My Queen

. The acclaimed drama, based on the international best-selling novel by Chantal Thomas, comes to high-definition Blu-ray and DVD from eOne and Cohen Media Group on January 15, 2013, with SRPs, respectively, of $29.98 and $24.98. 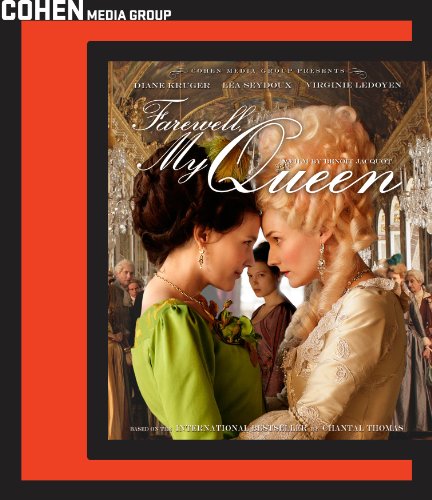 marks the return to U.S. screens of acclaimed director Benoit Jacquot (A Single Girl, Sade, The School of Flesh), who brilliantly captures the passions, debauchery, occasional glimpses of nobility and ultimately the chaos that engulfed the court of Marie Antoinette (Diane Kruger, Inglourious Basterds, Unknown) in the final days before the full-scale outbreak of the revolution.

The film stars Lea Seydoux (Mission: Impossible - Ghost Protocol, Midnight in Paris) as Sidonie, one of Marie's ladies-in-waiting, seemingly an innocent but quietly working her way into her mistress' special favors, until history tosses her fate onto a decidedly different path. As the story of the revolt by the starving French people against their arrogant royal rulers - embodied by Marie - develops, the action moves effortlessly from the gilded drawing rooms of the nobles to the back quarters of those who serve them.

Also starring Virginie Ledoyen (The Beach, 8 Women) and a great box-office success in domestic release, this is a period film at once accurate and sumptuous in its visual details - Jacquot shot within the walls of the actual Versailles - and modern in its emotions.

is a layer cake of royal pleasures, rote protocols and revolutionary politics. For skeptics who thought this story had grown stale, let them eat their words.

The Boston Herald's James Verniere said, "The film boasts Vermeer-like interiors lit by candle or firelight glowingly reflected in gilt-adorned paneling and screens, and in one memorable shot, the gleaming skin of a nude sleeping Gabrielle [Ledoyen]."

About Cohen Media Group (www.cohenmedia.net)
Formed in 2008 by Charles S. Cohen, an executive producer of multiple Academy Award nomineeFrozen River, the COHEN MEDIA GROUP, LLC (CMG) is a theatrical film production company that has been steadily developing into a dynamic, positive force within the film industry. By 2010, with the addition of Steve Scheffer and Edmondo Schwartz to its team, CMG established a formidable distribution division.

COHEN MEDIA GROUP's intent is to produce and distribute select films throughout North America annually, allowing the CMG team to devote their best efforts toward each, unique film's fullest potential.