Friendship Doesn't Have an Off Switch 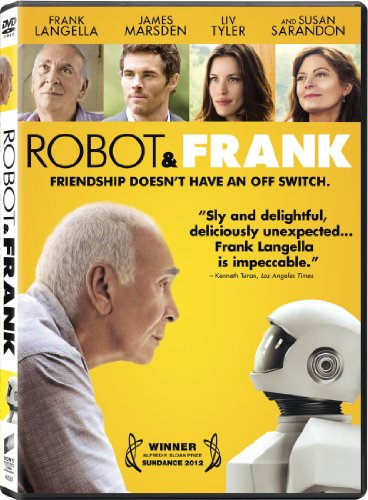 CULVER CITY, CALIF. (December 3, 2012) - A heartwarming story about finding friends and family in the most unexpected places, Robot and Frank

was awarded the Alfred P. Sloan Feature Film Prize at the 2012 Sundance Film Festival and is nominated for Best First Screenplay by the 2013 Film Independent Spirit Awards.

Bonus features on the DVD include commentary with Director Jake Schreier and Writer Christopher Ford, along with a photo gallery of the Robot posters created for the film.

Synopsis:
Set in the near future, Frank, a retired cat burglar, has two grown kids who are concerned he can no longer live alone. They are tempted to place him in a nursing home until Frank's son chooses a different option: against the old man's wishes, he buys Frank a walking, talking humanoid robot programmed to improve his physical and mental health. What follows is an often hilarious and heartwarming story about finding friends and family in the most unexpected places.

has a run time of 89 minutes and is rated PG-13 for some language.

"Academy Award(R)" and "Oscar(R)" are the registered trademarks and service marks of the Academy of Motion Picture Arts and Sciences.