Lorraine Levy won the Best Director award at the 2012 Tokyo International Film Festival As he is preparing to join the Israeli army for his national service, Tel Aviv resident Joseph (Jules Sitruk) discovers he is not his parents' biological son, and that he was inadvertently switched at birth with Yacine (Mehdi Dehbi), the son of a Palestinian family from the West Bank. Two young men from opposite sides of a bitter social and religious divide discover that they are really not who they were brought up to be in the powerful drama.

"An extraordinary film" - Roger Ebert, Chicago Sun-Times "One of the best dramas of the year" - Billy Tatum, Paste magazine 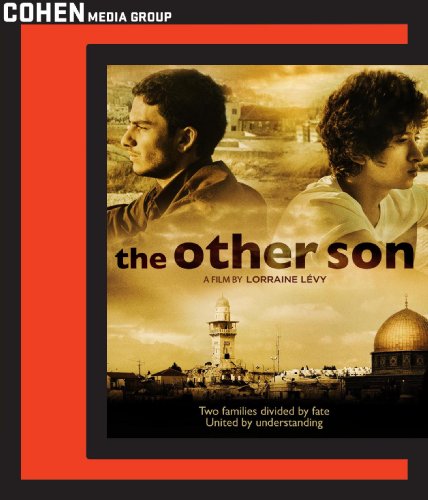 , a Cohen Media Group theatrical release, earned more than $1.2 million at the U.S. box office and won the Best Director award at the 2012 Tokyo International Film Festival. Both the Blu-ray and DVD editions contain a wealth of bonus materials, including a making-of featurette, deleted scenes and blooper reel. The DVD features 5.1 Dolby Digital sound, while the Blu-ray has DTS-HD Master Audio.

As he is preparing to join the Israeli army for his national service, Tel Aviv resident Joseph (Jules Sitruk, Nos resistances)discovers he is not his parents' biological son, and that he was inadvertently switched at birth with Yacine (Mehdi Dehbi, the upcoming Mary, Queen of Scots), the son of a Palestinian family from the West Bank. At the time of the boys' birth during the first Gulf War, a missile attack forced the hospital's evacuation, and in the confusion, the boys were sent home with the wrong parents. Now, 18 years later, this revelation turns the lives of two families upside down, forcing them to reassess their identities, their values and their beliefs.

Writer-director Lorraine Levy (London Mon Amour) and co-writer Nathalie Saugeon focus on how the young men and their families deal with the situation, with awkward visits among newfound relatives across the border and arguments within the families about years spent harboring an "enemy." Because Joseph is now not technically Jewish, his military service is canceled; Yacine considers leaving his family to take advantage of the opportunities allowed on the other side of the Jewish-Palestinian divide.

But not all of the revelations are negative: the musically inclined Joseph apparently takes after his biological father in that respect, and Yacine, who has been studying medicine in Paris, learns that his biological mother did the same thing.

Walter Addiego of the San Francisco Chronicle called The Other Son

"a compelling, humanistic family drama." Bloomberg News' Craig Seligman called it "remarkable, a rare film." Stephen Whitty of the Newark Star-Ledger said, "Particularly fine is Emmanuelle Devos, the veteran actress who plays [Joseph's] mother, and whose character suffuses this film with hope." Kelly Vance of East Bay Express called the film "a provocative, moving social drama, superbly thought out and well acted by its cast." The film, said Newsday's Anderson, "manages to touch both the heart and the head."