Years after a cruel kids' prank during a birthday party for 8-year-old Tommy (Tommy Knight) left hired clown Richard 'Stitches' Grindle (Ross Noble) dead on the kitchen floor, the childhood friends gather to plan a birthday bash to end all bashes. But they haven't counted on the degenerate jester rising from the grave...

HE'S THE CLOWN WITH THE KILLER ACT - ONLY IT'S NO ACT, AND HE'S GOING TO HAVE THE LAST LAUGH ON HIS TORMENTERS

, debuting with special April Fools' Day screenings in select cities on April 1, 2013. For fans who can't catch the rampage on the big screen, Stitches

will be available on VOD, Digital Download, Blu-ray(TM), and DVD on April 2 from MPI /Dark Sky Films. 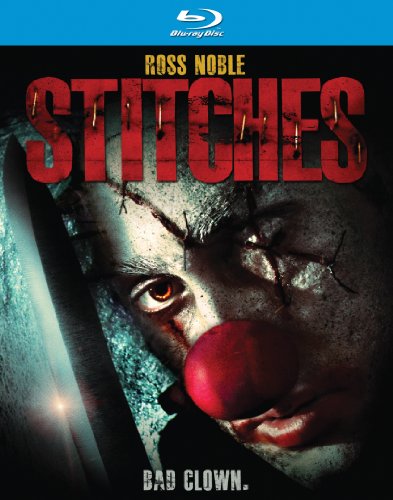 Years after a cruel kids' prank during a birthday party for 8-year-old Tommy (Tommy Knight, Doctor Who, The Sarah Jane Adventures) left hired clown Richard "Stitches" Grindle (Ross Noble) dead on the kitchen floor, the childhood friends gather to plan a birthday bash to end all bashes. But they haven't counted on the degenerate jester rising from the grave to seek vengeance on the children who mocked him and caused his grisly, untimely end.

Now Tommy and his teenage friends are on the run from an undead jokester who's ready to use every trick in the book (and many that aren't) to exact his revenge. Dead Meat writer-director Conor McMahon delivers a delirious slasher epic, a hilariously twisted and blood-soaked tale of one very bad clown with a talent for making balloon animals - but with one very hideous difference.
Winner of the Best Death Scene prize at Fright Fest, and also an Official Selection at the Sitges, Telluride and Brussels film festivals, Stitches

"Over-the-top ludicrous ... the fun factor blows right off the scale." - Dread Central "A must for those who appreciate imaginative gore-mongering, with scene after scene of brain-scooping, lung-exploding, eye-javelin-ing brilliance. - Natasha Hodgson, SFX "A relentless and brutal slasher that's not only ultraviolent, but also off-the-wall gory. But the icing in the ice cream cake is how original the death scenes are taking the genre to an entirely new level (think Killer Klowns weird)." - Bloody Disgusting "A Halloween crowd-pleaser." - Rosie Fletcher, Total Film "It is for the over-the-top inventiveness of its latex gore effects that STITCHES is most memorable." - Anton Bitel, Little White Lies

Red-carpet screenings will be held in New York and Los Angeles to mark the film's release, with star Tommy Knight in attendance. Stitches

is an original Dark Sky Films production in partnership with Fantastic Films, Tailored Films and The Irish Film Board.

About Dark Sky Films
Dark Sky Films is dedicated to the discovery, preservation and production of new and classic horror, sci-fi and cult films from around the world. Based in Chicago, Dark Sky Films is a wholly owned subsidiary of The MPI Media Group - one of the largest independent entertainment companies producing and distributing a compelling slate of the world's most respected cinema, documentaries, performances and television programs.