In celebration of Shout! Factory's April 16th release of A MONSTER IN PARIS on 3D Blu-ray Combo Pack and DVD: When and how did A Monster in Paris begin? What does 3D change in the process? How did Vanessa Paradis find Lucille's voice?

A Monster in Paris Embeddable Slideshow


A Monster In Paris

IN STORES EVERYWHERE ON APRIL 16, 2013 FROM SHOUT! FACTORY 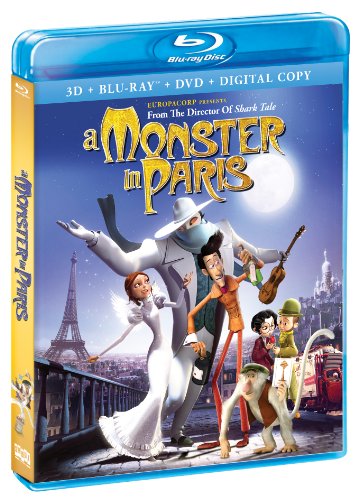 on the platform of their choice and includes spectacular movie presentation on Blu-ray 3D and 2D, DVD and a digital copy of the movie compatible with PC, MAC, iTunes, iPhone and AppleTV.

SYNOPSIS
A wacky inventor, his camera-crazy best friend and a madcap monkey make a massive mistake when let loose in a mad scientist's laboratory. With lotions and potions spilling everywhere, the troublesome trio accidentally creates Franc, the product of a reaction between a common flea and one of the scientist's mystery concoctions. What they fail to realize, however, is that this 'monster' is actually a soft-centered soul with an astounding talent for music.

With the help of an enchanting nightclub singer Lucille, Franc becomes the talk of the town, just as stories of Paris's newest monster attract the attention of the egotistical police commissioner, hell bent on securing a big prize to help his battle to become mayor. The unwitting scientists and the singer must team up to protect Franc, a monster with more than a musical career to protect!

EXCLUSIVE TO TWO-DISC BLU-RAY(TM) 3D COMBO PACK
Movie presentation on Blu-ray 3D and 2D, DVD and a Digital Copy of the film