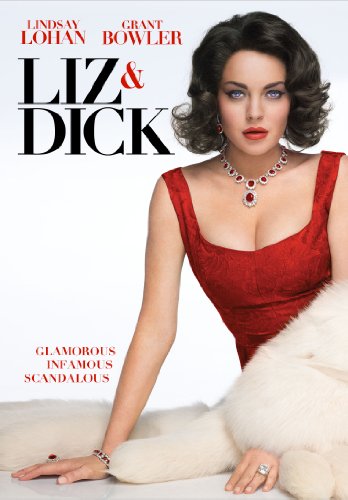 Exploitive much? Lindsey Lohan brings her tabloid gravitas to a movie picking over the bones of the woman, whose life was the material of tabloid legend. Not very good as a biography, not very good as a movie, this film careens from cringeworthy to boring. For Lohan completists only (or maybe Grant Bowler fans).

Unfortunately, Liz & Dick is typical TV-movie biography fare that might as well been made on a tight budget with nobodies like in the 1970s. Nothing really distinguishing abou the writing, directing, casting or production. The plot is straightforward historical and skips from scandal to the next without any attempt to really get to know the characters of Elizabeth Taylor and Richard Burton and somehow it makes them less interesting and more petty. The longing to quit the movie business and move to Wales away from the cameras rings a bit hollow from the mouths of such media creatures. The odd interview interludes are distracting rather than illuminating. Like many of the bad TV bios, this film has the unfortunate aura of an extended Saturday Night Live skit that is not funny and goes on too, too long.

Lindsey Lohan is nearly as bad as the critics claim. For anyone who remembers the persona of Elizabeth Taylor, this is a poor impersonation. It is one thing to get made up as and dressed up as for a photo shoot. But it is entirely another to evoke a persona in motion. The worst part is the voice. The squeaky schoolgirlish manner of Lohan is nowhere even in the ballpark in capturing the sound of Elizabeth Taylor. It was reported that Lohan wore opalescent lavender contact lenses for the role to try and give herself Taylor's famous violet eyes.

Lohan is one of those remarkable celebrities that seems to be incredibly famous and terribly interesting to a large number of people, who has actually done very much of any significance. Her resume contains two or three decent films like Mean Girls and Prairie Home Companion, some Disney films, like Freaky Friday and Herbie Gets Fully Loaded, some B-movies and a long list of arrest headlines. One of the jokes of her casting in Liz & Dick was that she was one of the most insured actresses ever to walk on a soundstage. The production began ominously when she suffered a car accident, but the filming completed in a short four-weeks.

Grant Bowler is serviceable in the role of Richard Burton, keeping his steady if uninspiring portrayal more in the realm of typical TV-movie mimicry. Most known to American audiences perhaps is his guest role of Captain Gault, the captain of a freighter on the television series Lost. Ironically, due to his Lost character's name, he might be less recognized for his portrayal of magnate Hank Rearden on the epically unseen epic two-part adaptation of Ayn Rand's Atlas Shrugged.

It was interesting that history often mentions the incredibly expensive jewelry that Burton bought Taylor, but does not alway remember the expensive gifts she bought him such as a 1635 Edition of John Donne poetry or a Vincent Van Gogh painting. At one point, Taylor compliments him on his acting and he reminds her that it was in observing her screen acting that he learned to not be "all over the place" and be still in front of the camera. While watching the scene where Burton gets passed over for the Best Actor Oscar in favor of Lee Marvin in Cat Ballou, it occurs what an injustice was paid him by Hollywood. It is a sad fact that Richard Burton never won the Oscar casts a long shadow on the credibility of the Academy Awards. Sometimes he lost out to great performances, but somewhere sometime he should have gotten one. Another fact that pops up is that the pair were together for twelve years

Theresa Russell appears in a forgettable turn as Taylor's disapproving mother. Academy Award-winning hair and makeup artist Beatrice de Alba was hired as head of the film's hair department, but some of the set-piece hair, makeup and costume scenes just look awful. Whether this is a function of the current production or a faithful reproduction of the awfulness of the past, is hard to determine. The movie debuted on Lifetime at Thanksgiving of 2012 and was its fourth most watched movie on that channel of that year, finishing right behind Abducted: The Carlina White Story.

The DVD package is straightforward and fits in well with the current era of cheaper DVD product. One surprise is the the sound, which is remarkable bright and interesting. The mix of the effects and music actually made me sit up and take notice. Good job there. The Extras on the disc is interviews with Lohan, Bowler, Director Lloyd Kramer, Writer Christopher Monger, Executive Producer Larry A. Thompson and Costume Designer Salvador Pérez Jr. In the menu for the interviews, the publicity shot is of Burton shielding Taylor from photographers as they sit in the back seat of a Rolls Royce. Oddly, that tire of the Rolls is the grip of a device to hold it in place and allow it to be rolled about. Bad cropping that.