PR: Nova: Mind of a Rampage Killer on DVD May 28

What makes a person walk into a theater or a church or a classroom full of students and open fire? In the wake of the tragic events in Newtown, a growing body of scientific research is bringing us closer to understanding the complex web of circumstances that can conspire to produce a rampage killer: uncontrolled violent urges, depression, and perceived social isolation.

Available on DVD from PBS Distribution May 28th

on DVD. What makes a person walk into a theater or a church or a classroom full of students and open fire? In the wake of the tragic events in Newtown, a growing body of scientific research is bringing us closer to understanding the complex web of circumstances that can conspire to produce a rampage killer: uncontrolled violent urges, depression, and perceived social isolation. 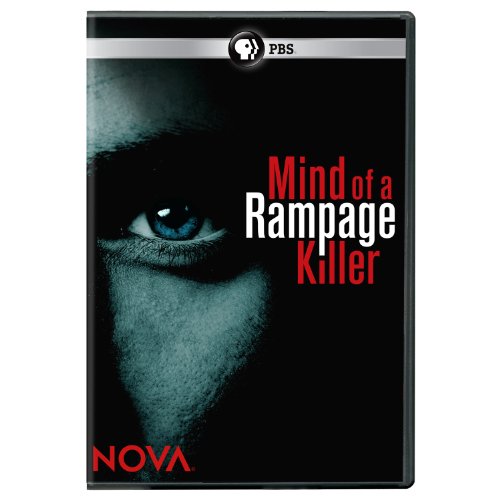 NOVA correspondent Miles O'Brien explores how brain function, genetics, and early life experiences may prime the brain for each of these risk factors. From the autopsy of a mass shooter in the 1960s through cutting-edge genetic research today, scientists are learning a lot about how our brains mediate violent urges - and what can go wrong when these "brakes" fail. And in the rare cases of rampage killers such as Adam Lanza, we'll explore how suicide, coupled with the desire to go out in a media-fueled blaze of glory, may be the main motivation. Nova: Mind of a Rampage Killer

Program Synopsis
To learn more, NOVA goes inside the mind of a killer named Andy Williams. When he was just 15, Williams opened fire on his schoolmates, killing two. In a rare interview, Williams, now 27 and serving 50 years to life in California's Ironwood Prison, reveals how months of loneliness and despair motivated him to attempt to "suicide by cop." Yet in the final showdown, Williams chose to surrender to police, making him one of a tiny number of surviving rampage killers - and one of the few people who can begin to answer the question: Why?
That's a question that haunts Andy's father, Jeff. Jeff reveals his struggle to understand how the boy he saw as a sweet class clown could have transformed into a murderer. We see old family videos of Andy as he goofs for the camera and see how his smiles hid his deep despair, escalating drug abuse, and suicidal urges.

Illuminated by neuroscience and psychology, these personal stories bring us one step closer to answering the ultimate question: Can we recognize and heal dangerous minds in time - and stop the next Newtown?

is part of PBS' "After Newtown" initiative, a series of documentaries, news reports and public affairs programs that provides thought-provoking context to the national conversation about gun violence in America. PBS has brought together its science, documentary and public affairs programs to provide in-depth reporting on the myriad issues related to gun violence, including gun laws, mental health support and availability, and school safety.

About NOVA
Now in its 40th season, NOVA is the most-watched primetime science series on American television, reaching an average of five million viewers weekly. The series remains committed to producing in-depth science programming in the form of hour-long (and occasionally longer) documentaries, from the latest breakthroughs in technology to the deepest mysteries of the natural world. NOVA airs Wednesdays at 9pm ET/PT on WGBH Boston and most PBS stations. The Director of the WGBH Science Unit and Senior Executive Producer of NOVA is Paula S. Apsell.

Funding for NOVA is provided by David H. Koch Fund For Science, the Corporation for Public Broadcasting, and public television viewers.
Additional funding for "MIND OF A RAMPAGE KILLER" is provided by Millicent Bell through the Millicent and Eugene Bell Foundation.