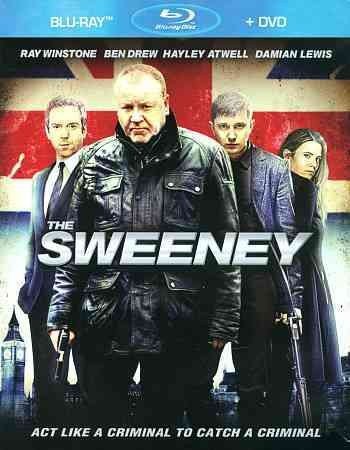 A great group of actors are on board for this story of a London crime fighting force that promises plenty of action. Here's hoping the story behind the special effects and stuntwork is equally as engaging.

At this point, you might be thinking to yourself: “If I’ve seen one police-procedural, I’ve seen ‘em all.” That’s certainly how I feel about such fare, despite movie studios continually trying to put a unique spin on the genre. The latest effort is the 2012 British production The Sweeney, which is actually based on a 1970s TV show which centered on a real police unit named The Flying Squad. Nick Love (The Football Factory) directs this high-octane actioner that’s powered by the always-great character actor Ray Winstone (Sexy Beast, The Departed), along with a stellar British cast that also includes Homeland star Damian Lewis. Entertainment One brings The Sweeney to Blu-ray with stellar audio and video tracks and a rather large number of supplements, surprising given the film’s relative anonymity, especially in the U.S.

While one could argue that the sheer British-ness of The Sweeney is original enough, unfortunately, the film really brings nothing new to the police-procedural genre. The film gets off to a rollicking start and we’re instantly thrown into Jack Regan’s (the leader of this group of police officers) world, as he’s attempting to get to the bottom of a huge robbery that just occurred. The first half of the film rarely lets up, despite some an unnecessary subplot involving Regan and the affair he’s having with a married fellow-cop, Nancy Lewis (Hayley Atwell), but things take a turn for the slow and boring, ironically enough, after we witness the film’s most exciting sequence. After this gun battle in Trafalgar Square, we witness a shocking fatality, which is then followed by a hunger for revenge that nearly saps all of the mystery, intrigue, and, well, excitement out of the film’s second half.

Despite a slew of cockney accents that are often indecipherable, the acting is far superior to the story, despite Winstone sometimes seeming a bit out of sorts (I don’t dare say disinterested) at times. Not to say that Winstone isn’t solid here, he’s just not as manic and unleashed as he usually is. Damian Lewis’ presence is felt during his hand-full of scenes, but he’s miles away from his scene-stealing, Emmy-award-winning work on Homeland. The best performance here is from relative newcomer Ben Drew, who plays Winstone’s second-in-command, George Carter with a mix of youth and toughness that take the film’s action sequences to the next level. Overall, the cast is strong, but it just can’t quite save the film’s overwrought screenplay and dull second act.

Entertainment One presents The Sweeney in its original 2.40:1 widescreen format, with a 1080p transfer. The film looks fantastic, to say the least, beginning with crystal clear, sharp images that exhibit such fine detail that it’s often hard to believe that we aren’t looking at a window rather than a television. The colors are bright and magnificent, with a wide variety of blue hues being showcased (this is a police-procedural, after all), and helped along by excellent-handling of contrast and black levels. The audio is a DTS-HD Master Audio track that showcases a great deal of dynamic range throughout the film. Booming bass comes exploding to life during the action scenes, but, despite the cockney accents, the dialogue is always crystal clear and well-integrated into the overall mix.

There’s a surprisingly generous number of extra features here, beginning with a 25-minute behind-the-scenes piece that blends cast and crew interviews with on-set footage to deliver a very nice, comprehensive look at the making of The Sweeney. Preparing The Sweeney is a 15-minute look at how the film was conceived via interviews that include a discussion about how Nick Love wrote an initial script was back in 2007. There’s also a15-minute look at the film’s most intense sequence, which takes place, and was shot in Trafalgar Square, four more minutes of interviews with Winstone, Love, and actor Ben Drew, and another four minutes of some of the film’s cast at an actual shooting range, honing their craft. This piece is followed by an in-depth, eight-minute look at another of the film’s major sequences at a caravan park, which was filmed in collaboration with the TV series Top Gear. We also get a peak at a pair of Animated Storyboards, and lest we forget an audio commentary track for the film, featuring the participation of writer/director Love and some of the film’s producers.