The ten-part clone conspiracy thriller, produced by Temple Street Productions, is co-created by Graeme Manson and John Fawcett, with Manson also serving as writer and Fawcett as director. Ivan Schneeberg and David Fortier are executive producers on behalf of Temple Street. Bonus Features include: Character Profiles, Set Tour, and Send in the Clones Now: Behind the Scenes featurette.

"It is, flat out, one of the most intriguingly entertaining new series of the year" - The Hollywood Reporter 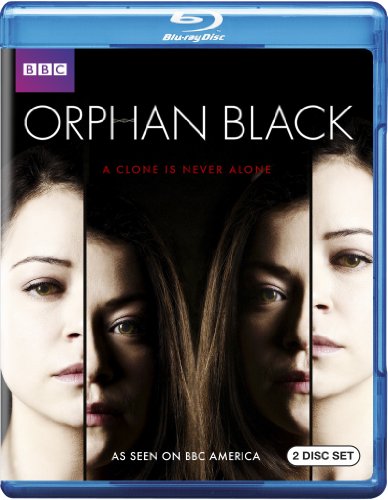 features rising star Tatiana Maslany (The Vow, Picture Day). Maslany portrays Sarah, an outsider and orphan whose life changes dramatically after witnessing the suicide of a woman, "Beth," who looks just like her. Sarah takes her identity, her boyfriend and her money. But instead of solving her problems, the street-smart chameleon is thrust headlong into a kaleidoscopic mystery. She makes the dizzying discovery that she and the dead woman are clones... but are they the only ones? Sarah quickly finds herself caught in the middle of a deadly conspiracy, racing to find answers.

The Hollywood Reporter says: "It is, flat out, one of the most intriguingly entertaining new series of the year," and the New York Post says: "If God and the Emmys are fair, at least six Maslanys will be picking up statuettes this September." Orphan Black

SARAH (Tatiana Maslany) is a natural chameleon, a born outsider living on the fringes and surviving by her wits. She began life in an English orphanage and was bounced between foster homes until she landed on the doorstep of Mrs. S, who finally adopted her and her foster brother Felix. When Sarah was 14, Mrs. S uprooted them under suspicious circumstances and moved them to North America. Sarah steadfastly remained the English punk, a street-smart stray with a reckless streak and a loyal heart. She's made bad choices in life, but she's always done right by her daughter Kira, even if that meant the pain of separation. Now, all Sarah wants is to reunite with Kira and turn over a new leaf... but her encounter with Beth changes everything.

BETH (Tatiana Maslany) is Sarah's entry point into the mystery. She is revealed backwards from the moment of her death, as Sarah takes on her identity and reconstructs her last days. By literally becoming Beth, part of Sarah's journey lies in understanding her, and she comes to deeply respect the valiant, damaged cop she so rashly switched places with.

FELIX (Jordan Gavaris) is Sarah's thorny foster brother and the one true confidante she can be honest and open with. He's a struggling artist, worldly beyond his 23 years. Like Sarah, Felix is a stray cat and hustler, keeping more than one sugar daddy to fund his artistic ambitions. He is caustic and dramatic, constantly complicating things for Sarah. But they're the closest thing either of them has to family, and when the chips are down, they're fiercely loyal to one another.

PAUL (Dylan Bruce) is Beth's boyfriend - a decent guy with chiseled features who Sarah falls into bed with against her better judgment. Before taking on Beth's identity, Sarah had never been involved with a supportive and solid man like Paul. Despite the fact that she is deceiving him, she takes solace in Paul. But Paul is more complicated than he appears.

MRS. S (Maria Doyle Kennedy) is Sarah's hard-nosed working class foster mother from across the pond. She's given up a lot to raise Sarah, who, until now, has never shown an ounce of respect or appreciation for her sacrifices. Their relationship is estranged and deeply strained over Mrs. S' care of Kira, Sarah's daughter. But Mrs. S is tough for a reason. While at first she seems like an obstacle, she has much to reveal about Sarah's origins.

ART (Kevin Hanchard) is a veteran detective who works alongside Beth. Out of loyalty, he helped clear Beth of a civilian shooting. Now, with Sarah posing as Beth, Art grows suspicious of her uncharacteristic and erratic behavior. One thing becomes clear; he is not a man who likes a mystery to go unsolved.

VIC (Michael Mando) just can't help himself. He's Sarah's ex, a volatile ball of male insecurity and exactly the kind of bad energy Sarah is trying to rid her life of. "Vic the Dick" (as he is aptly nicknamed) is lovelorn, betrayed and sporadically violent - a bad mix. But no matter what he learns about Sarah, he keeps coming back for more, screwing things up for her in the process.