In his latest film, Marian Marzynski returns to Poland and the Jewish ghettos of his childhood. But this time, he is not alone. The film chronicles the poignant, painful recollections of other child survivors and rescues haunting pieces of the past while exploring the conflicting feelings about national, cultural, and religious identity that mark many survivors.

CHILDREN OF THE HOLOCAUST RECOUNT EXTRAORDINARY STORIES OF SURVIVAL IN

on DVD. Over the course of his 50-year career, filmmaker Marian Marzynski has occasionally turned his cameras on himself and his story of surviving the Holocaust, which claimed the life of his father and millions of other European Jews. In his latest film, Marzynski returns to Poland and the Jewish ghettos of his childhood. But this time, he is not alone. The film chronicles the poignant, painful recollections of other child survivors and rescues haunting pieces of the past while exploring the conflicting feelings about national, cultural, and religious identity that mark many survivors. Frontline: Never Forget to Lie

will be available on DVD beginning July 9, 2013. The run time of the film is 60 minutes. The DVD SRP is $24.99. The program will also be available for Digital Download. 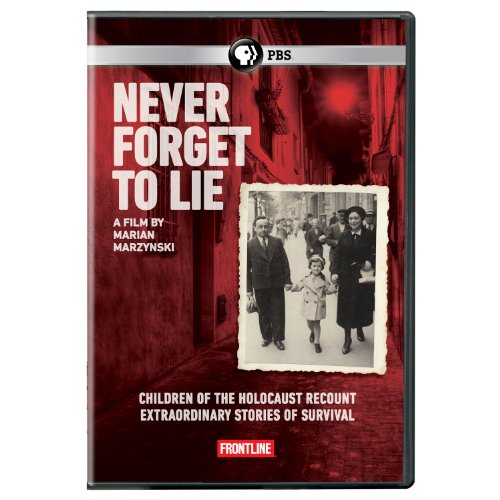 "The Holocaust story has been told by others; this is our turn," Marzynski says. "In our old bodies, we are still children."

In Frontline: Never Forget to Lie

, Marzynski attends an annual Warsaw gathering of Holocaust survivors. He accompanies some of them to the Warsaw ghetto from which he and others escaped through the aid of sympathetic Christian friends. Their childhood memories bear the stain of Nazi oppression: Marzynski recalls playing a wartime version of hide and seek, whereby one Jewish child would shout "Germans!," and the others would hide until told to come out.

"I remember boots - clean, beautiful, awesome, shiny boots," a woman recalls of the Nazi soldiers who marched into Poland. "I was afraid of those boots."

Lilian Boraks-Nemetz, a writer from Vancouver, relives the day her family was marched to the transportation for the death camps. "I am digging my nails into my mother's flesh. We start marching, and we walk and we walk. I keep crying and asking my mother, 'Where are we going?'"

At the last moment, Boraks-Nemetz and her mother were saved when they were shoved out of line and behind a gate by her father, who was working as a "Jewish policeman" charged with assisting in the deportations.

"He hated what he was doing, but he did it," she says, "because to survive in that insane jungle, he told me, you have to become an animal yourself."
Frontline: Never Forget to Lie

tells of parents who did anything possible to save their children, entrusting them to Christian friends, priests and orphanages. Many of the children were baptized as Catholics in order to provide them with the documents that could mean the difference between life and death. Some survivors recall the challenges of assuming their Jewish identities after the war.

Halina Kramarz fled her hometown with her mother to hide with Christian friends in Krakow during the war; her father died on an overcrowded train bound for a death camp. Yet she recalls being shocked after the war when her mother confessed that they were Jewish.

"I said, 'I can't be Jewish! I have nothing personally against the Jews, but I don't want to be one!'"

Marzynski - who relished his role as an altar boy while hiding with a Catholic priest -also admits that his religious faith dissolved because of his wartime experiences.

"My mother used to say that during the Holocaust, God was taking a long nap - and I agreed," he says. "So I call my religion 'survival.'"