Originally released in September 2012 on CD, this groundbreaking meeting of rock and classical music will now be released as a Blu-ray/CD set and double vinyl. The recording of this incredible album began in June 2011 in Liverpool featuring Jon Lord, the marvelous rhythm section of Guy Pratt and Brett Morgan with the Royal Liverpool Philharmonic Orchestra.

AS BLU-RAY/CD AND DOUBLE VINYL 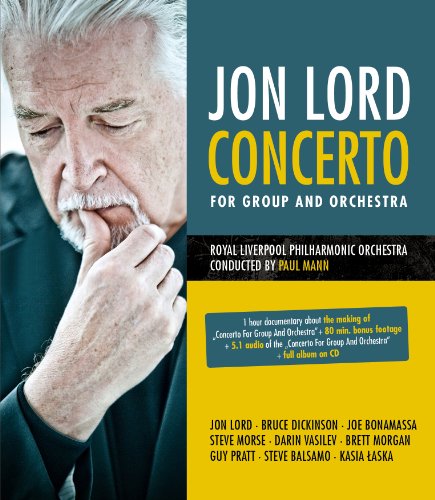 . Originally released in September 2012 on CD (earMusic/Eagle Rock), this groundbreaking meeting of rock and classical music will now be released as a Blu-ray/CD set and double vinyl. [MSRP $19.98 Blu-ray/CD, $24.98 2LP]

The recording of this incredible album began in June 2011 in Liverpool. Lord, the marvelous rhythm section of Guy Pratt (Pink Floyd, Madonna) and Brett Morgan (Jon Anderson, Sting) with the Royal Liverpool Philharmonic Orchestra (with whom Jon had recorded twice before) were conducted by Paul Mann. The production then moved to Abbey Road Studios in London to record Iron Maiden's Bruce Dickinson (on vocals with Steve Balsamo and Kasia Laska) and Joe Bonamassa, Darin Vasilev and Steve Morse on guitars.

Happily, Jon got to hear and approve the final mixes a few weeks before he passed away. The family and earMUSIC decided to proceed with the release of the album in September 2012 as scheduled, as this seemed the best way to celebrate and pay tribute to Jon and his beautiful music. Thus this superb studio recording of Concerto For Group And Orchestra is exactly the way Jon wanted us to hear it and will now hopefully become Jon's legacy for generations to come.

"Over these last years since leaving Deep Purple, I've played it over 30 times with different orchestras and conductors all over the world, and, of course, in 2000 I did it well over 30 times with Purple on the Concerto tour, so I've been honing the piece live on stage, and I've had the opportunity to change things in the score that weren't sounding quite right. It is therefore a marvelous and exciting prospect to have the definitive recording of the definitive version of the score." -Jon Lord May 2012

Following the huge demand of the fans, the Concerto will now be made available on double vinyl including a special bonus audio piece: Jon Lord's last interview with the BBC from August 2012. There will also be a very special Blu-ray + CD edition, which includes not only the full Concerto on CD and a 5.1 audio bonus piece on the Blu-ray, but the "Making Of" feature and in-depth interviews with Paul Mann and Marco de Goeij. Exclusive to this format is the new behind the scenes documentary "Up Close & Personal (Orchestral Recording Sessions)" which gives an interesting insight into the work of Jon Lord and the orchestra.

With his legendary organ blues-rock sound, Deep Purple's founder Jon Lord has influenced decades of rock musicians. He is with no doubt the pioneer of fusing rock and classical/baroque forms and became one of the most important composers of the last few decades. Jon Lord co-wrote many of Deep Purple's legendary songs including "Smoke On The Water" and played with many bands and musicians throughout his career (Whitesnake, Paice Ashton Lord, George Harrison). Best known for his orchestral work Concerto For Group And Orchestra was first performed and recorded at Royal Albert Hall with Deep Purple and the Royal Philharmonic Orchestra in 1969, conducted by the renowned Malcolm Arnold - a feat repeated in 1999 when it was again performed at the Royal Albert Hall by the London Symphony Orchestra and Deep Purple.

Jon's solo work was universally acclaimed when he eventually retired from Deep Purple in 2002 but he continued to tour the Concerto around the world to sell outs and standing ovations.