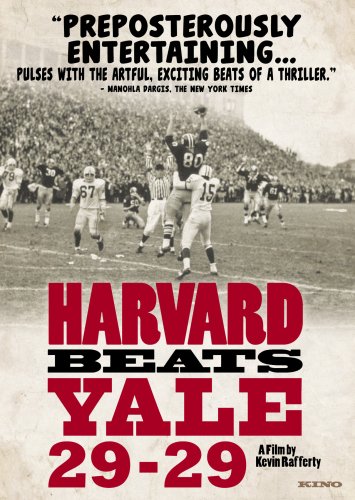 They know how to knit and stuff.

The jokes about Ivy League football sort of write themselves, especially since the Ancient Eight dispensed with athletic scholarships decades ago. (The high water mark was probably Penn's appearance in the 1979 Final Four, and occasionally a breakout player like Jay Fiedler will make it to the NFL, but these aren't exactly NCAA powerhouses.) So yeah, this is a documentary about a football game played more than 40 years ago that ended in a tieˇbut it's not a movie you want to watch exclusively for the fever of competition. Instead, it's kind of a brilliant portrait of the historical moment on two of America's most revered campuses, and how the powerful forces of the late 1960s had particular reverberations on the respective campuses in Cambridge and New Haven.

The game in question was played on November 23, 1968, at Harvard Stadium, with both teams coming in undefeatedˇstill, Yale was the heavy favorite, and one of the film's most unconvincing aspects is trying to portray the Harvard squad is a bunch of scrappy, working class fellas taking on the patricians. And there are more than a few brushes with the best and the brightest: on the Harvard squad was Tommy Lee Jones, who is interviewed extensively and discusses his roommate, Al Gore; Calvin Hill of Yale was probably the most skilled player on the field, though particularly legendary is Brian Dowling, the Eli quarterback and the inspiration for B.D., the QB in a comic strip starting to run in the Yale Daily News by a snotty undergrad named Garry Trudeau, called Doonesbury. (Unfortunately Trudeau himself isn't interviewed here; neither is a Yale cheerleader at the time, George W. Bush, or the girlfriend of one of the Yale players, a Vassar girl named Meryl Streep.)

There's plenty of game footage, and the game is indeed somewhat compellingˇmuch more intriguing, though, are the recent interviews with the players, men now in their early 60s with ferociously complete memories of this game, which for many seems like the defining contest of their collegiate careers. It's compelling how alive the game remains for them, and it's clear that for many of them, the game has been replaying in their heads for decades, rattling around like some grainy internalized personal Zapruder film. (This is particularly true for the Yale players, who were up by 16 points with less than a minute to go, and blew the lead, providing the opportunity for the cheeky Harvard Crimson headline that provides the movie's title.)

The now-versus-then aspects of things make this tremendously entertainingˇimages of these guys as young Hubbell Gardners, now many of them with gray or little or no hair, or great pot bellies, recalling both the game itself and what the time was like, Vietnam and assassinations, the dangerous sexual novelty of coeducation, the understanding for most of them that their athletic careers would end on campus before it's off to the board room. No doubt the audience for a project like this is self-selectingˇCollege Game Day isn't coming to the Yale Bowl any time soon, and this isn't for those looking for an off-season fix before first kickoffs in August. But it is a great and fascinating sociological undertaking, and is supplemented by 73 minutes of additional interview footage in the extras package (along with an original trailer), almost all of which focuses less on the game itself, and more on the general collegiate experiences of these guys back in the day.