Check out the trailer at: http://www.youtube.com/watch?v=KKRUKJ40SeI

AVAILABLE OCTOBER 22, 2013 ON BLU-RAY(TM) COMBO PACK WITH DVD & DIGITAL INCLUDING ULTRAVIOLET AND ON DEMAND
FROM UNIVERSAL STUDIOS HOME ENTERTAINMENT

"A BLAST WITH BOTH BARRELS BLAZING!" - LAURA GADDY, SHOCKYA.COM

Universal City, California, July 30, 2013--A ruthless outlaw returns from beyond the grave to avenge his own murder in Dead in Tombstone

will be available on early Digital October 8, 2013 as well as on Blu-ray(TM) Combo Pack with Digital including UltraViolet(TM), on DVD and On Demand on October 22, 2013, from Universal 1440 Entertainment, a production entity of Universal Studios Home Entertainment. Includes unrated version. 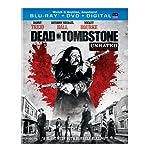 Straddling the thin line between life and death, Dead in Tombstone

anytime, anywhere on the platform of their choice. It includes a Blu-ray(TM) disc, a DVD, and Digital including UltraViolet(TM) for the ultimate, complete viewing experience.
* Blu-ray(TM) disc unleashes the power of your HDTV and is the best way to watch movies at home, featuring perfect hi-def picture and hi-def sound.
* DVD offers the flexibility and convenience of playing movies in more places, both at home and away.
* UltraViolet(TM) is a revolutionary new way for fans to collect their movies and TV shows in the cloud that lets consumers instantly stream and download to tablets, smartphones, computers and TVs, including iPad(R), iPhone(R), Android(TM) and more.
* Also includes Digital Copy.

EXCLUSIVE BLU-RAY(TM) BONUS FEATURES:
* BLU-RAY EXCLUSIVES:
* Horses, Guns & Explosions: Discover how some of the jaw dropping stunts were produced.
* Roel Reine: The Leader of the Gang: Learn about director Roel Reine's unique style and filming technique.
* A Town Transformed: Discover and watch how the town of Tombstone was created.
* Creating Hell: The Visual Effects: Explore the exhilarating visual effects.

BLU-RAY(TM) & DVD BONUS FEATURES:
* DELETED SCENES
* DELETED SHOTS MONTAGE
* THE MAKING OF DEAD IN TOMBSTONE: Go behind the scenes of this action-packed movie and get a glimpse into hell!
* FEATURE COMMENTARY with Director Roel Reine

SYNOPSIS:
Danny Trejo (Machete), Anthony Michael Hall (The Dark Knight) and Oscar(R) nominee Mickey Rourke (The Wrestler) star in this fiery, action-packed battle for vengeance. As a ruthless gang overruns a small mining town, they murder their own leader, Guerrero Hernandez (Trejo), in a cold-blooded power grab. Sentenced to eternity in hell, Guerrero finds himself confronted by Satan himself (Rourke), offering a daring proposition: deliver the six souls of his former gang and he will escape damnation. With time running out, he sets out on a brutal rampage to avenge his own death.

The Universal 1440 Entertainment banner develops and produces live-action and animated productions directly for the home entertainment, television and the stage. Since its formation in 2005, the group has assembled an exceptional roster of animated family fare, including the brand-new animated feature-length home entertainment release The Little Engine That Could; the Daytime Emmy(R)-winning "Curious George" television series on PBS KIDS; and a string of hit Barbie movies, based on the world-renowned Mattel-branded doll. The group also has successfully built upon some of Universal's highly celebrated live-action franchises, most recently launching the Tony Award(R)-nominated hit touring stage production Bring It On: The Musical; the adrenaline-fueled actioner Death Race 3: Inferno; and the epic- adventure sagaThe Scorpion King 3: Battle for Redemption. Projects currently readying for release include the all-new home entertainment features Dead in Tombstone, Curse of Chucky and Little Rascals, a reboot of the beloved family comedy. The group is part of Universal Studios Home Entertainment.