PR: Anything Is Possible on DVD Sep 24

takes audiences on a heartwarming journey that will make them laugh, cry, and believe all at the same time. The movie will be available on DVD on Sept. 24, 2013 at SRP of $27.97. Directed by Demetrius Navarro, Ethan stars with Jonathan Bennett (Memorial Day, Mean Girls) and Lacey Chabert ("Party of Five," Mean Girls). 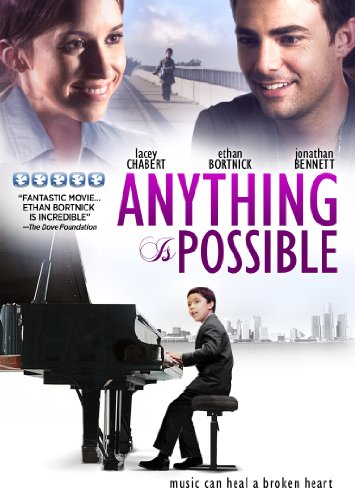 Ethan plays Nathan, a young boy who becomes separated from his mother, Army Lieutenant Margaret Peters (Chabert), when she goes missing during a tsunami rescue mission in Japan. Back home in Detroit, Child Care Services threatens to take Nathan away when it was revealed that his dad George (Bennett) isn't his biological father. Nathan runs away, but through the help and support of the strangers he meets along the way - including a homeless Iraq-war veteran, a wealthy philanthropist and kids at the local orphanage - he discovers his musical gift, a sense of belonging and his true purpose.

Ethan has a new PBS concert set to premiere this December. His last PBS special, "Ethan Bortnick And His Musical Time Machine" aired more than 700 times!

An entertainer and a humanitarian, Ethan has raised more than $30 million dollars for a variety of charities including the one closest to his heart, Children's Miracle Network.

Ethan has been a repeated guest on The Tonight Show, The Oprah Winfrey Show, Good Morning America, as well as national news and entertainments shows in Canada, Brazil and Australia. Despite sharing the stage with superstars like Beyonce, Natalie Cole, Nellie Furtado, Smokey Robinson and Patti La Belle, Ethan tells Oprah Winfrey during an interview about talented kids that, "We still have to stay humble."

Via its majority-owned subsidiary Agatha Christie Limited, RLJE manages the intellectual property and publishing rights to some of the greatest works of mystery fiction, including stories of the iconic sleuths Miss Marple and Poirot. And through its direct-to-consumer business, RLJE has direct contacts and billing relationships with millions of consumers.

RLJE leverages its management experience to acquire, distribute, and monetize existing and original content for its many distribution channels, including its nascent branded digital subscription channels, and engages distinct audiences with programming that appeals directly to their unique viewing interests. RLJE has proprietary e-commerce web sites for the Acorn and Acacia brands, and owns the recently launched Acorn TV digital subscription service.