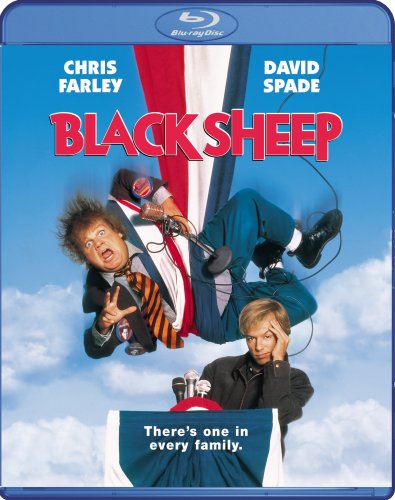 While it's not Farley and Spade's best film, it's still great to revisit this duo in one of the few films they were able to team up for.

Technically, this is a well-shaped film with a solid script by longtime head writer of Saturday Night Live, Fred Wolf, and crisp direction by Penelope Spheeris. The characters are reasonably well drawn although they do rely, as in most comedies, on well-established stereotypes. The action moves along briskly and very little time is wasted between gags. The comedy bits themselves are a mixed bag that run the gamut from inspired to stinkers, but this film manages to bridge the difficulties of combining a sketch movie with an overall story.

Farley is Mike Donnelly whose brother, political candidate Al Donnelly (Tim Matheson), is seeking the governorship of Washington state. A dimwitted yet lovable scamp, Mike wants nothing more than to help his brother win, but somehow everything he does ends up as a disaster. Handing out fliers at a supermarket, Mike gets his tie caught in the trunk of an elderly couple's car. When they try to leave quickly, thinking him "hopped up on crack," Mike is dragged around the parking lot, behind the car. A high point later is his accidental appearance on the stage at a "Rock the Vote" concert where he fires up the crowd nicely and hilariously.

David Spade, as ambitious political operative Steve Dodds, is Farley's partner in crime in this film and he trades closely on his main Saturday Night Live characters that used a brittle snippishness to drip out sneering putdowns. Appointed by the candidate at first to help his brother "contribute" and finally charged to keep him under wraps, Steve ends up involved in the insidious plans of their incumbent opponent to use the flaws of the younger Donnelly for political gain. Spade teamed with Farley is a comedy duo that manages to draw on elements of many of the classic movie comedy teams of the past. There is a well-rounded aspect of their characterizations that made Spade and Farley more successful in their transitions to post-SNL work than many of their television compatriots.

The acting adds a lot to this film that a lot of "dumb" comedies lack and really separates "good dumb" from "bad dumb." Matheson gives a solid performance in a fairly colorless role as the long-suffering brother. Gary Busey adds his special brand of lunacy as Drake Sabitch, a seemingly crazed veteran living in the wilds of Washington. Christine Ebersole, as the incumbent Governor, is very funny in her thoughtless¾yet oh-so-natural¾crooked, bigoted and snobby Governor looking to hold onto her office at any cost.

In many cases, I was wanting Black Sheep to go further. There are the slightest elements of political satire with the dirty tricks of the incumbent but this movie could have had so much more interest with more broadsides against the hypocrisy of election politics. Still, there is a little bit of that and perhaps more would have been too ponderous.

In researching this film's reception I noted many very negative reviews, including the claim that Gene Siskel referred to this as the only movie he walked out on in 26 years of movie reviewing. If I could I would note to Gene that he gave thumbs up to many films that were less funny, less interesting and certainly less well-made. Black Sheep is not intended to make any lists of the greatest comedies ever made. On the other hand, it is pretty funny and sometimes, that is enough.

ParamountĒs Blu-ray treatment of Black Sheep is a surprisingly great one, with the new, high-definition video transfer more than exceeding expectations. The 1.78:1 widescreen image features excellent, sharp image detail, with extremely accurate flesh tones and bright, natural colors throughout. The lossless Dolby TrueHD 5.0 audio track is nearly as impressive; with lively sound effects filling the sound field and directional effects adding to a much more dynamic audio experience than we bargained for. The only bad thing to say about this Blu-ray disc is its total lack of extra features, but the beefed-up audio and video will more than please the movieĒs fans.