ěDonít worry. No one ever died of insomnia.î - Trevor Reznik (Christian Bale) 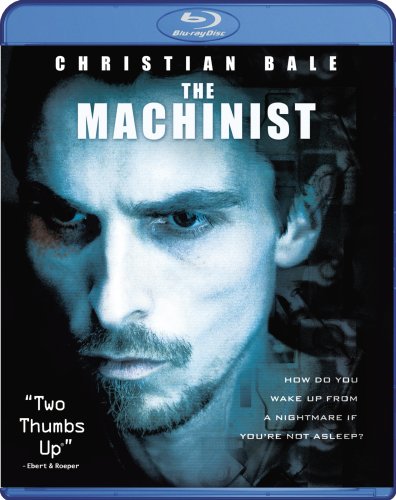 This amazing film finally gets the Blu-ray treatment, and I can't wait to see how it takes advantage of the format.

Film review by Rich Rosell. In The Machinist, Trevor Reznik (Christian Bale) looks very much like a concentration camp survivor, quite literally a rail-thin, cadaverous 110lb. skeleton plagued by what he refers to as a year-long case of insomnia. He visits a prostitute (Jennifer Jason Leigh) regularly, works in a dingy machine shop where his increasingly gaunt appearance and actions have begun to affect his performance and the safety of others, and he spends his nights scrubbing his bathroom floor with bleach and a toothbrush or drinking coffee at an airport diner under the kind gaze of a waitress (Aitana Sanchez-Gijon). Things really go to hell when strange Post-It notes start appearing in his grubby apartment after an encounter with a mysterious bald man named Ivan (John Sharian), and Reznik's insomnia is dramatically compounded by an escalating case of intense paranoia and confusion.

The story itself is an effectively dark thriller, with Anderson weaving the intricacies of Scott Kosar's script into an intentionally off-balance narrative layered with secrets and clues, but the real stunner is Bale himself. His performance is slippery and moves ever downhill as his character's mental condition deteriorates to the point where he throws himself in front of a car in order to convince police he has been the victim of a hit-and-run accident.

But in order to personify Kosar's vision of a man wasting away, the actor lost a startling 63 lbs., dropping one-third of his total body weight to get down to the skin-and-bones 110 he carries in the film. The first moments when we get a good look at Bale's troubled Trevor Reznik, he is hunched over a bathroom sink, and his spine protrudes like that of a stegosaurus, while his collarbone juts out like unnaturally as well. Combine this with Bale's sunken facial features, and the effect is completely haunting, making this a personal modification that easily eclipses De Niro's bulk up job in Raging Bull.

Jennifer Jason Leigh and Aitana Sanchez-Gijon play the polar opposites of the women in Reznik's life, a heart-of- gold hooker and a single mom waitress, both of whom apparently see something much deeper inside. We've all seen some variation of the good whore character before, but Jennifer Jason Leigh does a fine job with what could have just been a caricature; her big moment late in the film allows her character to believably and naturally unload her hopes and dreams on Reznik as she fixes him breakfast. It's a small moment, but it really accents her character beyond the realm of the one-note. Sanchez-Gijon plays it simple and clean, a pleasant waitress somehow attracted to Reznik to the point of inviting him to spend a day at an amusement park with her and her young son, building to one of the stranger moments in The Machinist, involving a progressively more demented funhouse ride.

From the opening sequence it is clear that Anderson has constructed his film to be one of those in which secret meanings hide in nearly every sceneómade even more clear after listening to the accompanying commentary track. The eventual plot reveals are extremely satisfying and clever (so essential to a story like this), but they almost pale next to the visage of Bale as a man about to vanish into nothingness.

The Machinist comes to Blu-ray in the form of a great release from Paramount. The 2.35:1 widescreen transfer features an intentionally drab color palette that benefits from excellent shadow and contrast levels. Images are pristine, with incredible sharpness and detail that lets us see every bit of Christian Baleís emaciated ribs. The Dolby TrueHD 5.1 lossless track is also impressive, creating an atmospheric audio experience that actually enhances this already great film. All the extras from the 2004 DVD release have been ported over, but the Blu-ray also offers up two great new making-of pieces, both of which are presented in 1080p, and making this a no-brainer upgrade for fans of this incredible cinematic achievement.