A Newly Married Woman Realizes a Loveless Life Awaits Her in Claude Miller's Film of a Classic Novel, Coming to DVD From MPI on November 19, 2013

, famed director Claude Miller's final film, a gorgeous adaptation of Nobel Prize winner Francois Mauriac's novel Therese Desqueyroux, about one woman's fight for love against the social norms of provincial life. The closing-night film of the 2012 Cannes Film Festival, THERESE follows its acclaimed national theatrical engagement with DVD release from MPI Home Video on November 19, 2013, with an SRP of $24.98. 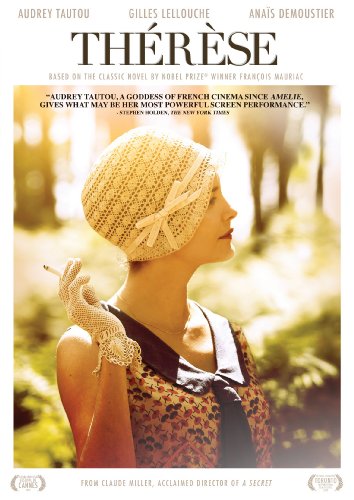 In the pine-forested Landes region in southwest France, young Therese (Tautou, Amelie, Chinese Puzzle, The Da Vinci Code) has married wealthy but arrogant Bernard Desqueyroux (Gilles Lellouche, Little White Lies, Mesrine: Killer Instinct) and is now part of the oppressively traditionalist Desqueyroux family. Although able to live in the lap of luxury, Therese soon realizes that her role is to be forever subservient to Bernard and act as little more than his accessory.

When her best friend (and Bernard's younger sister) Anna (Anais Demoustier, Time of the Wolf, Elles) falls madly in love with a handsome young Jewish man, Therese is tasked by the family to persuade Anna to forgo her planned nuptials. But as she witnesses first-hand Anna's passionate determination to keep her lover by her side, Therese finds her own desire growing and soon sets out to free herself from the provincial conventions that threaten to keep her forever repressed.

is a glorious testament to one woman's unwavering quest for true love.

Claude Miller (1942-2012) was a production manager or assistant director on classic films by Francois Truffaut and Jean-Luc Godard before launching is own directing career and creating such admired films as L'effrontee, The Little Thief, Alias Betty and A Secret. Therese

, Miller's final triumph, premiered at the 2012 Cannes Film Festival just one month after his death.

Wrote Sheri Linden of the Los Angeles Times: "Miller's film is a work of emotional reserve, eschewing psychological explanation in favor of unadorned observation - of human behavior as well as nature and the still lifes of the domestic world." Writing about THERESE, The New York Times' Stephen Holden said, "Audrey Tautou, a goddess of French cinema since Amelie, gives what may be her most powerful screen performance." Writing in the New York Daily News, Jordan Hoffman said the film is a "fascinating take on aristocratic social mores between the wars." "The movie is a fine swan song," praised Walter Addiego of the San Francisco Chronicle.