Set in New York City on the brink of Lincoln's assassination, Detective Kevin Corcoran (Tom Weston-Jones) struggles to tame the wartime metropolis while wrestling with personal demons, including the betrayal of his wife and best friend. And when Tammany Hall's outspoken General Brendan Donovan (Donal Logue) returns from the Civil War to restore law and order in the Sixth Ward...

has "...Action, Passion and Great Performances..." 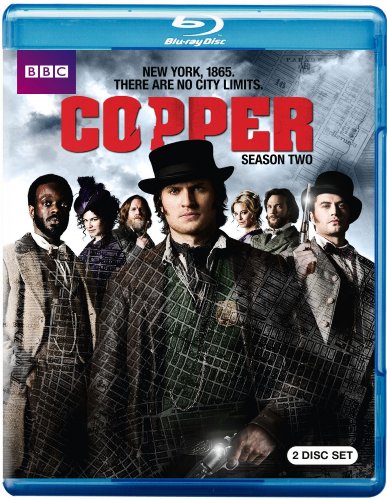 Set in New York City on the brink of Lincoln's assassination, Detective Kevin Corcoran (Tom Weston-Jones, MI-5) struggles to tame the wartime metropolis while wrestling with personal demons, including the betrayal of his wife and best friend. And when Tammany Hall's outspoken General Brendan Donovan (Donal Logue, Sons of Anarchy, Vikings) returns from the Civil War to restore law and order in the Sixth Ward, loyalties will be bought and sold both uptown and in the slums of the Five Points as Corcoran, and those around him, fight to find their places in an unforgiving city. Copper: Season 2

At the end of last season, Corcoran left his best friend and partner, Detective Francis Maguire (Kevin Ryan, Tripping Tommy, RAW), for dead after learning of his affair with his wife; his former war comrade and wealthy industrialist, Robert Morehouse (Kyle Schmid, Arrow, Being Human), thwarted the plot by Confederate spies to burn the city; and Corcoran's secret weapon in forensics, Doctor Matthew Freeman (Ato Essandoh, Django Unchained, Elementary), was preparing to start a family with his wife Sara (Tessa Thompson, For Colored Girls, Veronica Mars) leaving behind the demons of her brothers' lynching during the slum's draft riots.

"This season we wanted to raise the stakes and dive into the 1860s political machine by bringing in a Boss Tweed like character to shake things up," said co-creator and executive producer, Tom Fontana. "With the addition of General Brendan Donovan, we reveal a highly volatile faction of old New York City, Tammany Hall, and sink our characters into storylines including, counterfeiting, illegal Union Army recruitment, the 13th amendment and its ramifications for "freed" slaves, public health hazards and more. By making the universe a little fuller, it gave us a chance to breathe new life into the history of this great city."

With Donovan's presence, Corcoran sees a chance to make a difference in his ward. Now that Corcoran's wife Ellen (Alex Paxton-Beesley, Alphas, The Firm) has returned, his affair with Madame Eva Heissen (Franka Potente, American Horror Story, The Bourne Supremacy) is over and he's fighting to return to a sense of normalcy. However, his loyalty to the badge and his love/hate relationship with The Points often puts him back in familiar territory - away from home.
Also appearing this season include multiple award-winning actress, Alfre Woodard (Twelve Years a Slave, Steel Magnolias), as Hattie Lemaster, a former slave recently arrived to Five Points to start anew with her daughter Sara Freeman; William "Billy" Baldwin (Gossip Girl, Hawaii Five-O) as William "Wild Bill" Eustace, a tough and charming Tammany Hall fixer with a genius for political machination; Eamonn Walker (Chicago Fire, Oz) as legendary abolitionist leader, Frederick Douglass; Lee Tergesen (Army Wives, Oz) as Philomen Keating, a wickedly intelligent criminal mastermind whose tendency for dramatic flair is offset by a penchant for brutality and Andrew Howard (Hatfields and McCoys) as James O'Rourke, the physically intimidating yet shrewdly observant manager of a budding criminal organization.