PR: American Masters: Marvin Hamlisch - What He Did For Love on DVD Jan 14

"AMERICAN MASTERS" DOCUMENTARY American Masters: Marvin Hamlisch - What He Did For Love

IS THE FIRST FILM BIOGRAPHY OF THE COMPOSER-CONDUCTOR

Arlington, Va. - December 30, 2013 - PBS Distribution today announced it is releasing the American Masters documentary American Masters: Marvin Hamlisch - What He Did For Love

on DVD. Composer, conductor, genius, mensch: Marvin Hamlisch (June 2, 1944 - Aug. 6, 2012) earned four Grammys, four Emmys, three Oscars, three Golden Globes, a Tony Award and a Pulitzer Prize before his untimely death, making him one of only two PEGOT winners ever. Hit after hit - "The Way We Were," "Nobody Does It Better" and scores for The Sting, Sophie's Choice and the Broadway juggernaut A Chorus Line - made him the go-to composer and performer for film, Broadway, every U.S. President since Reagan and concert halls worldwide. With exclusive access to Hamlisch's personal archival treasure trove and complete cooperation from his family, Dramatic Forces and THIRTEEN's American Masters explore his prolific life and career. 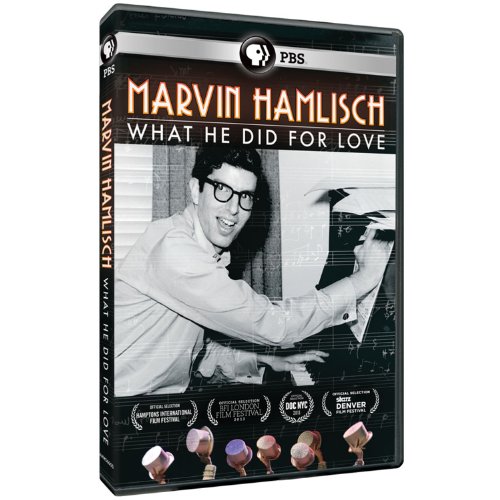 Marvin Hamlisch - What He Did For Love

"Marvin Hamlisch was a consummate artist: gifted, creative and personable. His music is part of the essential soundtrack to so many of our lives," said Susan Lacy, executive producer and American Masters series creator.

"Marvin's astounding musical genius was certainly breathtaking, but it was his irrepressible joy for life and his unending generosity that constantly had me in awe. What a tremendous honor and challenge to capture the magic of this singular sensation," said Berinstein, who was friends with Hamlisch and collaborated with him on a new Broadway musical before his death. She is working to finish the musical, which will feature his final score.

A musical prodigy accepted to Juilliard at age six, Hamlisch defied classical expectations to create his own music, dedicating his talents to musical theatre and pop music composition. By age 31, he achieved unprecedented success and honors with a string of smash hits, and then his streak ended. Faced with overwhelming pressure and sky-high expectations to repeat his hits, Hamlisch fell into a self-described "period of suffocating despair," before rebounding to find true love worthy of a Broadway musical and renewed passion for creation. "MARVIN HAMLISCH: WHAT HE DID FOR LOVE" reveals the events that led to both his staggering success and, ultimately, his even greater humanity: his creative process, struggles, inner turmoil and breakthroughs.

Since its 1986 premiere, American Masters has earned 26 Emmy Awards -- including nine for Outstanding Non-Fiction Series since 1999 and five for Outstanding Non-Fiction Special -- 12 Peabodys, an Oscar, three Grammys, and two Producers Guild Awards. Now concluding its 27th season on PBS, the series is a production of THIRTEEN. WNET is the parent company of THIRTEEN and WLIW21, New York's public television stations, and operator of NJTV. For more than 50 years, THIRTEEN has been making the most of the rich resources and passionate people of New York and the world, reaching millions of people with on-air and online programming that celebrates arts and culture, offers insightful commentary on the news of the day, explores the worlds of science and nature, and invites students of all ages to have fun while learning.

To take American Masters beyond the television broadcast and further explore the themes, stories and personalities of masters past and present, the companion website (http://pbs.org/americanmasters) offers streaming video of select films, interviews, essays, photographs, outtakes, and other resources. American Masters is also seen on the WORLD channel, a 24/7, full-service multicast channel featuring public television's signature nonfiction documentary, science and news programming, broadcast in nearly two-thirds of the United States.

Marvin Hamlisch - What He Did For Love

is a production of Dramatic Forces and THIRTEEN's American Masters in association with WNET. Dori Berinstein is director, producer and writer. Alan Deutsch and Jimmy O'Donnell are directors of photography. Penelope Falk is editor. Music by Marvin Hamlisch. Music arranged and adapted by Matthew Sklar. Motion graphics are by Brian Oakes. Andrew Herwitz and Mitchell Cannold are executive producers. Susan Lacy is executive producer and American Masters series creator.

American Masters is a production of THIRTEEN. The series is made possible by the support of the National Endowment for the Arts and by the Corporation for Public Broadcasting. Additional funding for American Masters is provided by Rosalind P. Walter, Anne Ray Charitable Trust, Cheryl and Philip Milstein Family, The Philip and Janice Levin Foundation, The Blanche & Irving Laurie Foundation, Rolf and Elizabeth Rosenthal, Jack Rudin, The Andre and Elizabeth Kertesz Foundation, Michael & Helen Schaffer Foundation, and public television viewers.

About WNET
In 2013, WNET is celebrating the 50th Anniversary of THIRTEEN, New York's flagship public media provider. As the parent company of THIRTEEN and WLIW21 and operator of NJTV, WNET brings quality arts, education and public affairs programming to over 5 million viewers each week. WNET produces and presents such acclaimed PBS series as Nature, Great Performances, American Masters, PBS NewsHour Weekend, Charlie Rose and a range of documentaries, children's programs, and local news and cultural offerings available on air and online. Pioneers in educational programming, WNET has created such groundbreaking series as Get the Math, Oh Noah! and Cyberchase and provides tools for educators that bring compelling content to life in the classroom and at home. WNET highlights the tri-state's unique culture and diverse communities through NYC-ARTS, Reel 13, NJTV News with Mike Schneider and MetroFocus, the multi-platform news magazine focusing on the New York region. WNET is also a leader in connecting with viewers on emerging platforms, including the THIRTEEN Explore iPad App where users can stream PBS content for free.

American Masters: Marvin Hamlisch - What He Did For Love