"Ask me anything about sharks and Nazis." - Ricky, on his addictions to the Discovery Channel 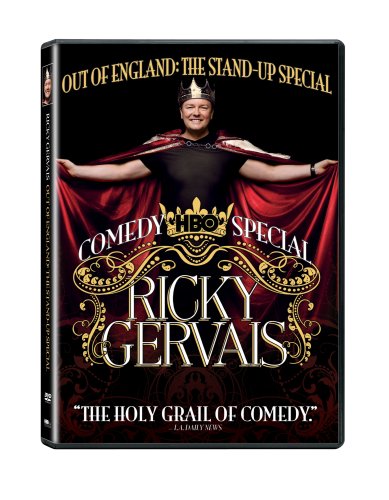 Ricky Gervais just may be our kind of all media, and in truth it doesn't look like anybody enjoys their success quite as much as he. This DVD brings us his standup act, taped in New Yorkóhe's at Madison Square Garden, and one of the unintentional blessings of his local gig is that it made it possible to go at least a couple of nights without yet another Knicks home loss. He's a great and warm and funny presence, but you can't help feeling, watching this, that he's not quite funny enough hereóyou get the sense that the audience wants to cut loose and roar with belly laughs (or at least relive favorite moments from The Office), and though Gervais can be really funny, it's not all at a very high level.

On some sense you've got to hand it to him for the breadth of his material—it's not everyone who can do standup about Nietszche, or Rosa Parks, and who doesn't shy away from potentially hazardous material, like Anne Frank. But some of this has a sense of him emptying out the old comedy notebook—how else, for instance, to explain an extended riff on the British-Argentine war in the Falklands? And there are times at which you wonder if Gervais hasn't lost something off his fastball with a live audience, because he now spends most of his professional time in front of cameras rather than people—his delivery is occasionally a bit stilted, but perhaps that's eased some by the epic can of Foster's from which he takes sips between topics.

Some of the humor is unquestionably puerile and adolescent, which is fine; but the best bits, really, are Gervais having a go at his own public persona, where he plays the grand man, the celebrity, and deliberately blurs the line between himself and David Brent, perhaps his supreme creation. He can be outrageously self-congratulatory, but he really is kind of a riot when he's like that—indignant with cancer patients, for instance, for not paying him proper respect at a benefit performance. All in, it's an amusing hour or so of standup, but nothing grand, and Gervais is done no favors by the technical elements here—there's some weird cutting that may have been used to take out dead spots from the live show; and there are some serious amplification problems, which may have more to do with the venue where this was shot than with the DVD transfer. The only extra is an HBO promotional puff piece, a bit grandly called A Conversation with Ricky Gervais (11m:02s).