, available March 25 on Blu-ray(TM) Combo Pack, DVD and Digital* from Sony Pictures Home Entertainment. In this action-packed animated film, two of Marvel's most popular characters, Black Widow (voiced by Jennifer Carpenter, TV's "Dexter") and the Punisher (voiced by Brian Bloom, "Call of Duty: Modern Warfare 3") team up alongside Iron Man, Thor, Hulk, and the rest of the Avengers. 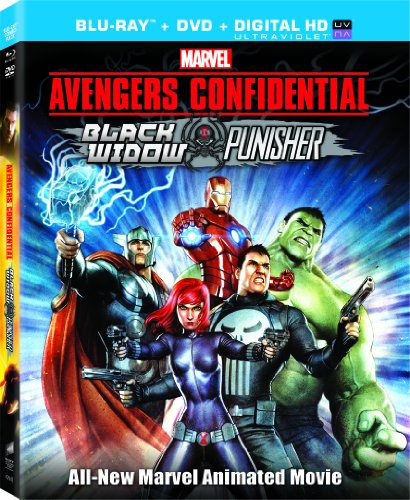 with two revealing, making-of featurettes "Espionage and Punishment" and "The Vigilante Vs. The Spy." In both featurettes, fans will hear from filmmakers on the highly anticipated pairing of two of Marvel's most deadly Super Heroes. The Blu-ray(TM) Combo Pack includes a special Conceptual Art Gallery offering fans an expanded view of the imaginative design.

Synopsis:
After interfering with a top secret mission, THE PUNISHER is taken into custody by S.H.I.E.L.D. AGENT and AVENGER, BLACK WIDOW. At the orders of Director Nick Fury, Punisher and Black Widow are sent on a mission to stop LEVIATHAN, a global terrorist organization that plans to sell stolen S.H.I.E.L.D. technology to the highest bidder. Now, the vigilante and spy must work together to prevent this technology from falling into the wrong hands. The fate of the world, and of the AVENGERS, hangs in the balance.

was directed by Kenichi Shimizu, with a story by Marjorie Liu and screenplay by Mitsutaka Hirota. It was produced by Marvel, Sony Pictures Entertainment (Japan) Inc. and Madhouse Inc. The film has a run time of approximately 83 minutes and is rated PG-13 for sequences of action violence.

Blu-ray and DVD bonus features:
* "Espionage and Punishment" featurette -- This featurette looks at the exciting versions of these popular Marvel characters as adapted in this stunning style of anime. From early concept art and storyboards to the final film, all aspects of creating the compelling story of this unique anime feature are explored.

* "The Vigilante Vs. The Spy" featurette - A look at the Marvel's Frank Castle (The Punisher) and Natasha Romanoff (Black Widow). Each of these characters feature dark and complex origins that led them to extreme action and extraordinary lives.

ABOUT ULTRAVIOLET
UltraViolet is an entirely new way to collect and enjoy your digital entertainment, giving you the power to instantly access your movies and TV shows with unprecedented flexibility. For more information, visit www.uvvu.com.

MARVEL ENTERTAINMENT, LLC
Marvel Entertainment, LLC, a wholly-owned subsidiary of The Walt Disney Company, is one of the world's most prominent character-based entertainment companies, built on a proven library of more than 8,000 characters featured in a variety of media over seventy years. Marvel utilizes its character franchises in entertainment, licensing and publishing. For more information visit marvel.com/