Do plants have feelings? A prolific horror writer, Eric Shapiro has crafted a tense and fast-paced film set around a dining table and the politics of food. Rhoda Jordan and Ben Siegler, a liberal yogini and her more conservative father-in-law, square off on veganism vs. meat-eating, in a PETA-endorsed narrative.

DO PLANTS HAVE FEELINGS?

Coming to DVD April 15, 2014 with On Demand Platforms to Follow
LOS ANGELES, CA (April 1, 2014) A prolific horror writer, Eric Shapiro has crafted a tense and fast-paced film set around a dining table and the politics of food, which ends with a surprising twist. The film, Living Things: A Vegan vs. Meat Debate Movie

features Rhoda Jordan and Ben Siegler, as a liberal yogini and her more conservative father-in-law, who square off on veganism vs. meat-eating, in a PETA-endorsed narrative which will be available on DVD as of April 15, with On Demand platforms to follow on May 15. 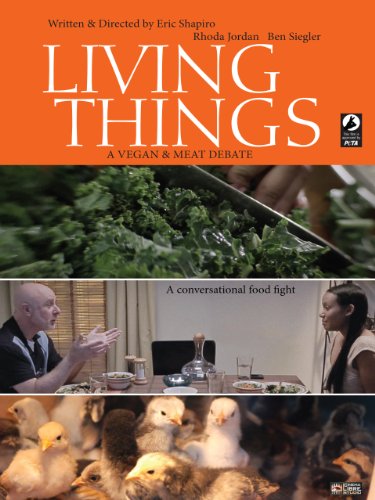 Shapiro is a filmmaker, screenwriter, author, and ghostwriter. His first feature film, RULE OF THREE (2010), was released on iTunes and Netflix after winning Best Actor at the Fantasia International Film Festival and Best Acting Performance at Shriekfest. He wrote the books LOVE & ZOMBIES (2013), THE DEVOTED (2012), STORIES FOR THE END OF THE WORLD (2010), and SHORT OF A PICNIC (2002). His novella IT'S ONLY TEMPORARY (2005) was on the Preliminary Nominee Ballot for the Bram Stoker Award in Long Fiction. He has had short stories published in fiction anthologies alongside work by Ray Bradbury, Stephen King, Neil Gaiman, Chuck Palahniuk, and many others.

A vegetarian since 2002, Shapiro works with his spouse, Rhoda Jordan, an actress who plays the character "Rhona" in the film and who was also in RULE OF THREE. In addition to acting, she is a yoga and meditation teacher who collaborated on making the low budget film. Like most screenwriting tips suggest, Shapiro wrote from "what he knew," basing the Rhona character in part on his wife, and the "Leo "character, played by Siegler, in part on his Grandpa Abe.

"The initial seed for Living Things

," says Shapiro, "was planted when I saw a friend post a link on Facebook about how plants have feelings. This is the one of the standard arguments used by meat-eaters who are interested in invalidating vegans or vegetarians. It was interesting to see how the discussion unfolded: vegans and vegetarians were tagged as self-righteous and deluded, and the argument got very heated and vitriolic. You see this a lot online, underneath vegetarian/vegan articles or posts: The talk-backers shred the diet from all directions, and the anger is usually real intense. Since raising money's always an issue in indie film, I felt the emotion of the conflict and the simplicity of having two people together for dinner - along with my passion about vegetarianism - made for an irresistible combo. There was nothing that could stop us from shooting it."

Bruce Wieland of PETA says of the film: "We appreciate the strong case that Living Things

makes for going vegan and that it does so in such a well-acted, engaging, and ultimately entertaining way. From the meat industry's rampant abuse of animals and the environmental devastation that it causes to the tremendous health benefits of a vegan diet, there are many significant reasons why going vegan should be at the top of everyone's priority list. We wish more movies focused on this life-saving message in as compelling a manner as Living Things

, and we hope this fine film reaches the wide audience that it deserves."

SYNOPSIS: Rhona, a yoga instructor committed to a vegan lifestyle, must entertain Leo, her red meat-loving, blue collar father-in-law, as she waits for her husband to join them for dinner. When Leo attempts to apologize for a past insult, he instead opens up a debate that challenges her belief system. Their conversation quickly escalates into a heated argument that scrutinizes animal cruelty, climate change, health, morality, and spirituality.

Endorsed by PETA (People for the Ethical Treatment of Animals) and reminiscent of the classic film My Dinner With Andre, Living Things presents a compelling dialogue about humanity and the benefits of a healthier, environmentally-conscious lifestyle.

The 75 minute film will become available in North America on April 15 on DVD (at traditional DVD retails outlets) and On Demand platforms (Amazon Instant, Hulu and Cinema Libre On Demand) to follow one month later (May 15, 2014).

ABOUT CINEMA LIBRE: Cinema Libre Studio is a leader in distributing social-issue documentaries and features by passionate filmmakers. Headquartered in Los Angeles, the Cinema Libre team has released over one hundred films including the Sundance Audience Award-Winning FUEL, THE END OF POVERTY?, Rachid Bouchareb's LONDON RIVER and Oliver Stone's SOUTH OF THE BORDER. The studio is in pre-production on John Perkins' best-selling memoirs, CONFESSIONS OF AN ECONOMIC HIT MAN, into a major motion picture. For more information and updates, please visit: www.cinemalibrestudio.com