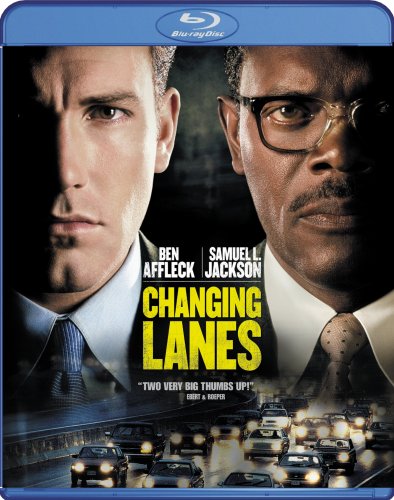 A nifty thriller begins as an allegorical look at road rage before sinking into a trite and unsatisfying final act.

If ever there was a topic rife for exploration, road rage is it. Affecting all us commuters ± some more than others, weĒre often quick to demonize the other driver to the point where theyĒre a lot more sadistic and moronic than they often are.

Roger MichellĒs Changing Lanes probes this aspect and does it quite well. Gavin Banek (Affleck) is a promising young attorney speeding his way toward an important court appointment when he suffers an accidental collision with Doyle Gipson (Samuel L. Jackson), an alcoholic insurance salesman also headed to court ± him for a custody hearing. Banek doesnĒt pay much mind to the accident, concerned only with meeting his appointment. Gipson, too, is only concerned with getting to the courthouse but finds himself stranded roadside as a result of the attorneyĒs self-interest. But thereĒs a catch, in his hurry to leave the scene, Banek leaves behind a stack of case-important papers which now fall into possession of the desperate father.

The allegoric nature of the film is made abundantly clear by the progression of the story as Banek and Gipson find themselves involved in a series of escalating scenarios, each one designed to destroy to life of the other. These schemes occasionally border on the ridiculous, to the point, I suspect, of director Michell. ThereĒs a point to be made here and if it can boiled down to a simplistic core (two sides to every story), Changing Lanes does an amiable job of walking the tightrope between the absurd and the important while remaining a surprisingly entertaining film throughout.

ThatĒs large in part because of the actors involved. Affleck takes a lot of heat for his on screen personas, but IĒve always liked the guy. Even when his character is the catalyst for much of the destruction that follows, AffleckĒs slow realization of this makes him a flawed, yet likeable, protagonist. Jackson is his usual excellent self as the desperate father whose life falls apart at the hands of a thoughtless act. ItĒs not hard to side with Samuel L. and he manages some truly memorable character bits. The supporting cast is also every strong, headed by the late, great Sydney Pollack (who was as good an actor as he was a director) and Richard Jenkins. Toni Collette is trapped in a largely thankless role as AffleckĒs beau, but itĒs a strong performance considering the material.

ItĒs not all roses, though. While so much of the film is crisp and engaging, the third act literally comes out of nowhere, nearly representing a total betrayal of all that has come before. ItĒs a ļwrap-upĒ that stinks of studio tampering (thanks test audiences, youĒve done it again), complete with a forced, ļhappyĒ ending thatĒs very difficult to digest. Even with the solid performances intact, the ending leaves us on a false note and a bad impression.

And itĒs too bad, because Changing Lanes is solid if not as ļgreatĒ as several of the box reviews claim. That said, itĒs a thriller that offers substance and does so with a good sense of filmmaking. For that alone IĒd recommend at least a rental if not a purchase.

VIDEO:
Paramount has been doing an awesome job with wrangling a solid chunk of catalogue titles onto Blu-ray. The quality is occasionally hit or miss, but in the case of Changing Lanes theyĒve offered a very pleasing high definition transfer.

Detail is strong and crisp, making this AVC MPEG-4 encode a thoroughly satisfying one for your monitors. Best of all, occasional DNR offenders, Paramount didnĒt bother with any artificial noise reduction here, leaving a pleasing transfer. In fact, the only detriment I noticed was the occasional sprinkle of dirt ± surprising for a film only seven years old.

NobodyĒs going to buy this disc thinking theyĒre getting reference material, but fans of the film wondering whether or not itĒs worth an upgrade can rest easy. It is. Very much so.

AUDIO: Unfortunately, the Dolby Digital 5.1 True HD track doesnĒt impress as much as the video presentation. Most of the action is relegated to the front speakers, with very little attention paid to the rear-channel. There are a few moments in the film which couldĒve benefited from surround and bass support, but these things fall flat, leaving a very clear track that lacks any bite.

EXTRAS: Two featurettes (both in SD), offering a look at production (14 mins) and the writing (5 mins), respectively. ItĒs typical promotional stuff and nothing terribly memorable. Ten minutes of deleted scenes (also in SD) are character-based bits that only reiterate what we already know about our stars. Nothing special.

Roger Michell provides a solo commentary that offers one of those tired, blow-by-blow narrations corresponding to whatĒs happening on screen. Meh.