"Your word ain't worth two squirts of piss from a dead dog's dick." - Grandpap (Dick Mullaney) 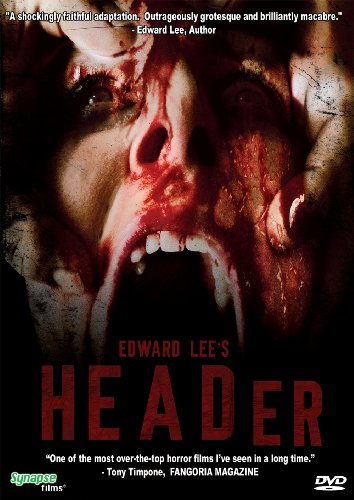 What's a header? You're going to have to delve into the absolutely nasty delights of this Ed Lee adaptation to find out. Of course, you could do one better and just read the book ...

Edward Lee is one of the best horror authors working today. His material, loaded with sexual perversities and unimaginable, over the top gore, may not possess mainstream appeal but you have to respect the way in which this man can write the macabre. When I saw that someone had actually made a film based on one of his novellas, I couldn't resist the urge to check it out.

The first question you might ask before watching is: ěwhat the hell's a header?î Well, Iím not talking so youíre gonna to have to read the book to find out. You could watch the movie, sure, but thatís a tougher horse to back. I'm not suggesting that itís a bad film (although itís certainly not good), but Header suffers from a budgetary constraints that prevent a truly satisfying realization of Lee's story. Sure, the characters and dialogue are intact, but the uneven collection of actors rob the film of some much needed levity.

The story runs parallel between two characters, ATF Agent Stuart Cummings (Jake Suffian) and parolee Travis Clyde Tuckton (Elliot V. Kotek). Agent Cummings tries to walk the straight and narrow path but, with a sickly wife to care for, heís forced onto a crooked path of drug deals and murder in order to make ends meet. His job also puts him on the trail of a brutal killer (Tuckton) on a quest for vengeance. These paths converge in a bloody climax that isnít afraid to go for the jugular.

This was an ambitious undertaking for the cast and crew. Director Archibald Flancranstin does triple duty editor, dp and master of ceremonies. He aptly handles the story: quieter scenes drive things along as successfully as the mayhem, and the violence packs a nasty punch (it wouldn't be bona fide Lee if it didn't). Flancranstinís film also benefits from some truly effective and, frankly, disgusting sound design. Many people claim Tobe Hooperís Texas Chainsaw Massacre to be gorier than it actually is and Header succeeds in similar effect. Even when the film doesnít show the grue, the sticky sound effects will have you reeling.

I respected the effort from Flancranstin and co. and, as mentioned, the movie does benefit from Leeís sparklingly authentic dialogue. Unfortunately, the exposition-heavy story slags a bit as a result. Our director/editor spices things up with interesting editing to give the film a more interesting visual look, but Header did work better as a novel.

Furthermore, the actors run the gamut from solid to below average - especially in the supporting roles. Right across the board, minor roles are flaccid, leaving me to wonder how this wouldíve turned out with a better set of co-stars.

Another element worth noting is Ben Goldberg's terrific musical score. It's slow and haunting, helping the events captured in the film to linger with the viewer after its finished. A good score is not to be underestimated and Goldberg's work here does add another dimension to Header

Itís a low-budget flick, but if youíre up for wallowing in some pretty nasty depravity for 89 minutes, you could do a lot worse. These guys were trying to create something memorable within the genre and for that they should be commended. Iím not sure they succeeded, but if it helps turn anyone onto the beautifully depraved works of Edward Lee, than this little film will have served its purpose ten times over.

VIDEO:
Header is a mixed bag on DVD. The image quality is fine, boasting a clear and colorful image. We run into problems with the color red, however, offering distracting jaggies whenever there's an abundance of the color on screen. A minor defect, considering how often it occurs, but it's worth noting.

AUDIO:
The three-channel stereo track is nicely handled, with booming audio that handles the dialogue with crystal clear accuracy. This is mainly a center-channel track, but it separates the audio perfectly. Nothing to complain about as far as audio goes.

EXTRAS:
The extra material is a little on the light side, offering one production featurette split into six parts and running about fifty minutes. This is a nice feature offering talks with the director (who seems like a nice, down-to-earth guy), author, stars, FX, producer and Jack Ketchum (just 'cause Ketchum freakin' rules). We get a lot of insight into the making of the film as well as some welcome personal insight into these participants. Rounding out the supplements are two promotional trailers.

This won't be everyone's cup of gore, but those of you looking to support grassroots horror should find this Synapse DVD worth a rental if not a purchase.