ěThey should give you the Golden Virgin Merit Badge.î - Jillian (Tania Raymonde) 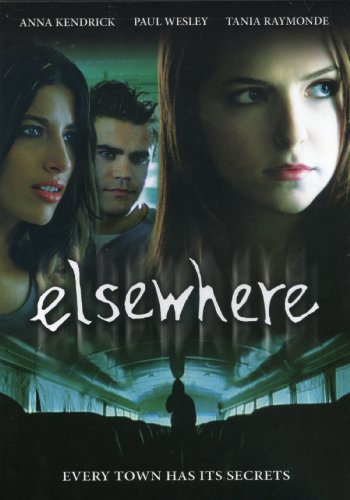 Apparently this flick made it into a handful of theaters unnoticed, earlier this year. The young cast and premise are at least somewhat intriguing.

Cell phones and teenagers are two things that go hand-in-hand these days. If you happen to actually come across a teenager without a cell phone, then chances are, they arenít exactly in the most popular crowd in their school. Quite a few teenagers also spend half of their time on the internet, doing everything they can to keep the makers of network monitoring software gainfully employed. Given these recent crazes, itís not really hard to fathom the recent influx of mobile phone/internet-oriented movies starring young actors. Most of these films look at the potentially harmful side of this technology, focusing on online predators or even going so far as associating supernatural killers with cell phones (One Missed Call). 2008ís Elsewhere is one of the more recent of this lot, and while it never had a fare shake at a wide theatrical release, the movieís young cast (led by Twilightís Anna Kendrick) should make it a sleeper hit on DVD.

Sarah (Anna Kendrick) is your typical modern-day high school student. Spending most of her time either browsing the internet or texting friends on her cell phone, Anna fits in perfectly with the likes of the overly flirtations Jillian (Tania Raymonde). Growing up in the small town of Goshen, Indiana boys are usually the only thing these girls have to worry about. Of course, something has to go wrong, and Jillian suddenly goes missing, leaving Sarah scrambling to find her. Initial clues lead Sarah to believe that a mysterious person whom sheíd been chatting with online abducted Jillian, but a series of strange cell phone calls and texts lead her in an entirely different, and totally unexpected direction.

The main issue with Elsewhere is that itís just so incredibly slow moving. While itís ok for a movie to have a few lulls, the first half hour here is so amazingly lifeless and full of unnecessary dialogue that I canít blame anyone for giving up before things really get going. The rest of the proceedings arenít much better, as we get one pointless, dialogue-heavy sequence after another. As far as the ěmysteryî goes, the revelation of the truth behind Jillianís disappearance is beyond predictable. So, we basically have a movie that moves at a snailís pace throughout, and a mystery that can be solved at the 15-minute mark by anyone thatís ever seen a thriller before. Therein lies the reason that youíve probably never heard of this flick before.

Much of the film, itself is forgettable, but I canít get past the blatant rip-off of the Friday the 13th seriesí ěKi-ki-ki- ma-ma-maî chant during a dream sequence. If youíre unfortunate enough to see this scene for yourself, youíll know what Iím talking about, but thereís really no reason to use such a recognizable, movie franchise staple. Given the numerous shortcomings of this slow, boring, pointless, predictable mess, itís clear that more time should have been spent writing a tighter, developed screenplay which might have resulted in an entertaining, edgy film.