An historical drama that tracks a recent chapter in Italy's history as a web of political corruption runs rampant from the Mafia to the Vatican. The film features an all-star cast, including Giancarlo Giannini, Rutger Hauer, Omero Antonutti and Pamela Villoresi.

, an historical drama that tracks a recent chapter in Italy's history as a web of political corruption runs rampant from the Mafia to the Vatican. The film features an all-star cast, including Oscar(R)-nominee Giancarlo Giannini (Seven Beauties, Casino Royale), Rutger Hauer (Blade Runner, The Mill and the Cross), Omero Antonutti (The Night of the Shooting Stars, El Sur), and Pamela Villoresi (The Great Beauty). 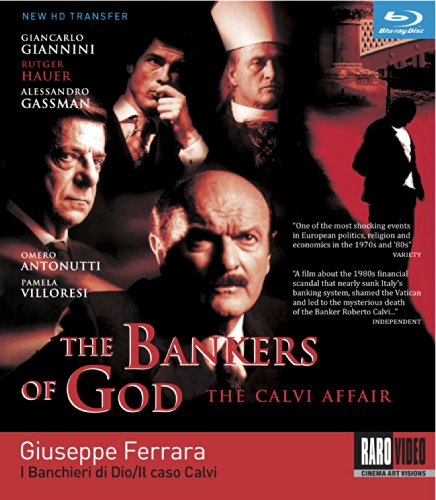 
* The Bankers of God: The Calvi Affair- original Italian trailer

ABOUT RARO VIDEO:
Stefano and Gianluca Curti started Raro Video Italy in 1999. Dedicated to digital restoration of films from a wide range of genres, bypassing any stylistic boundaries, the company has earned an outstanding reputation for the quality of its high-definition transfers. Its releases are also known for their supplemental content as well as the critical analysis and superb booklets that accompany each film. The firm opened its U.S. headquarters in Minneapolis, Minnesota in 2010. Raro Video U.S. is a subsidiary of Gruppo editoriale Minerva/Raro, which is owned by Minerva Pictures, a 50-year old production and distribution company that continues to make films and boasts a catalog of more than 1,000 films.

Available now from Raro Video U.S.: The Vanquished, The Clowns, The Anger, Live Like A Cop, Die Like A Man, Body Puzzle, The Visitor, Come Have Coffee With Us, The Overcoat, Murder Obsession, The Secret of Dorian Gray, Crime of Love, Young, Violent, Dangerous, Steam - The Turkish Bath, The Night of the Devils, Madness, The Automobile, To Be Twenty, Conversation Piece, The Perfume of the Lady in Black, Plot of Fear, Waves of Lust, Ubaldo Terzani Horror Show, The Fernando Di Leo Crime Collection Vol. 1, The Fernando Di Leo Crime Collection Vol. 2, Shoot First, Die Later, Hanging for Django, Il Generale Della Rovere, Nightmare City and Meet Him and Die.

ABOUT KINO LORBER:
With a library of 800 titles, Kino Lorber Inc. has been a leader in independent art house distribution for over 30 years, releasing over 25 films per year theatrically under its Kino Lorber, Kino Classics, and Alive Mind Cinema banners, including four Academy Award(R) nominated films in the last six years. In addition, the company brings over 70 titles each year to the home entertainment market with DVD and Blu-ray releases under its 5 house brands, distributes a growing number of third party labels, and is a direct digital distributor to all major platforms including iTunes, Netflix, HULU, Amazon, Vimeo, and others.