In 1942, Fritz Lang decided to make a film that would face the Nazi terror head-on. Working with the famous playwright Bertolt Brecht and the Oscar-winning cinematographer James Wong Howe, Lang devised a fact-based thriller that would shock and stir audiences.

The Politically Urgent 1943 Espionage Noir About Nazi Retribution Against a Resistance Hero Arrives in an Extras-Filled Edition on September 9, 2014

The great director Fritz Lang made his reputation in Germany with such landmarks as Metropolis, M and The Testament of Dr. Mabuse, but he left the country in 1933 as Nazism took hold. He continued his long and successful career in Hollywood, often returning to the themes of oppression and persecution, never more overtly than in his thriller Hangmen Also Die

, made midway through World War II. Now, the Cohen Film Collection is proud to present this important film in restored and remastered form on Blu-ray and DVD on September 9, 2014, with SRPs, respectively, of $39.98 and $29.98. 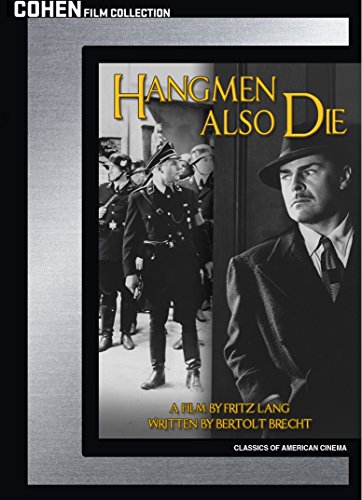 In 1942, Lang decided to make a film that would face the Nazi terror head-on. Working with the famous playwright Bertolt Brecht and the Oscar-winning cinematographer James Wong Howe, Lang devised a fact-based thriller that would shock and stir audiences. We are in German-occupied Czechoslovakia. Surgeon Franticek Svoboda (Brian Donlevy, The Miracle of Morgan's Creek), a Czech patriot, succeeds in assassinating the (real-life) "Hangman of Europe," the high-ranking Nazi and key Holocaust architect Reinhard Heydrich (Hans Heinrich von Twardowski). But Svoboda's getaway car is discovered and therefore his planned safe house must reject him. When a woman he doesn't know, Mascha (Anna Lee, future General Hospital matriarch Lila Quartermaine), deliberately misdirects German soldiers close to finding him, he seeks her home as a refuge.

This turns out to be the home of her father, history professor Stephen Novotny (Walter Brennan, Pride of the Yankees, The Real McCoys), who the Nazis have banned from teaching. With the assassin remaining elusive, the Gestapo in Prague offer an incentive for him to turn himself in (or for others to reveal him): They will execute 400 citizens, including Professor Novotny, 40 at a time, until the killer is in custody.

"marvelous anti-Nazi propaganda structured as a noir thriller. ... Superb performances throughout, while James Wong Howe's photography perfectly captures the spirit of the occupied city, where hiding places are few and far from safe." The reviewer for The New York Times in 1943 said the film "reveals Mr. Lang as a master of concentrated suspense," while Variety hailed it as "a triumph for Lang!" Lang biographer Patrick McGilligan cites Hangmen Also Die

as "among his most celebrated, most scrutinized films."

The Cohen Film Collection presents this classic in a restoration made in collaboration with the British Film Institute and Pinewood Studios; it features a one-minute sequence that was cut from the original domestic release. Other bonus material includes full-length audio commentary by former New York Film Festival program director Richard Pena, a featurette and an essay about the film and Fritz Lang, a comparison of the print before and after restoration, and more.