Beautifully presented in a fully illustrated hardcover book, this extensive DVD collection will transport viewers back in time to the sumptuous world of Britain's greatest treasure houses! Visit Highclere Castle, also known as Downton Abbey; Hampton Court Palace; Althorp; and Chatsworth. In addition to exploring these gorgeous estates, viewers will learn about the realities of upstairs-downstairs life. 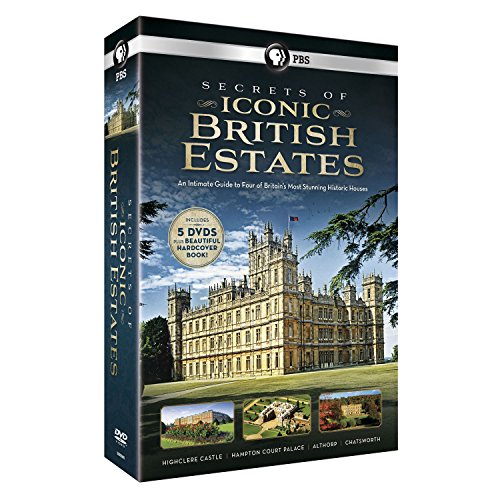 on October 14. Beautifully presented in a fully illustrated hardcover book, this extensive DVD collection will transport viewers back in time to the sumptuous world of Britain's greatest treasure houses! Visit Highclere Castle, also known as Downton Abbey; Hampton Court Palace; Althorp; and Chatsworth. In addition to exploring these gorgeous estates, viewers will learn about the realities of upstairs-downstairs life in the fifth DVD, Secrets of the Manor House.

will be available on October 14. The five programs within the box set have a combined run time of approximately 5 hours on 5 discs. The box set SRP is $39.99. Descriptions of each of the DVDs featured in this box set are below.

Secrets of Highclere Castle
It may be more famous now than any time in its 1,300-year history as the setting of the hit drama Downton Abbey, but England's Highclere Castle has its own extraordinary stories to tell. In its heyday, Highclere was the social epicenter of Edwardian England, playing host to royalty, nobility and celebrity alike. Secrets of Highclere Castle shows how all the inhabitants of Highclere lived, from the aristocrats who enjoyed a life of luxury and indolence for centuries in the castle's rooms (on an estate as large as New York City's Central Park) to the army of servants toiling endlessly below stairs to make the lives of their lords and ladies run as smoothly as possible.

Secrets of Althorp: The Spencers
This film takes viewers to the home of 19 generations of the Spencer dynasty. Althorp is best known as the childhood home and final resting place of Diana Spencer, Princess of Wales. In this special her brother Charles, 9th Earl Spencer, opens the doors of his family mansion for the first time to share with us its rich history and interior. The Spencers were the Kennedys of their day; glamorous, political and leaders of fashionable society. Their ancestral home has played host to practically every King and Queen of England of the past 500 years.

Secrets of Chatsworth
This documentary explores the estate's extensive grounds and tells, among other accounts, the tragic tale of Billy Cavendish, heir to Chatsworth's 10th Duke of Devonshire, and Kathleen Kennedy. Kathleen, the sister of U.S. President John F. Kennedy, married the British aristocrat, only to lose her husband after only four months of marriage. Billy was killed in action in World War II. Four years later, Kathleen died in a plane crash and was buried at Chatsworth.

Secrets of the Manor House
A fascinating glimpse of life behind the velvet curtains, this film goes inside the great homes of Edwardian England. One hundred years ago the British manor house was in its heyday, sheltering families of enormous wealth and privilege within its stately walls. But what was really going on behind closed doors, where these wealthy families and their poor servants coexisted?