"A peasant may worship a princess, but a princess will always despise a peasant." - The Peddler (Boris de Fast) 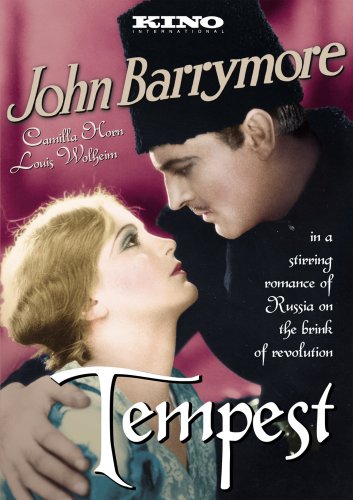 The fall of the Tsars has proven to be fertile ground for filmic drama, but one of the earlier of these efforts was John Barrymore's Tempest, produced only a decade after the events depicted. With a story written by a Russian, and a screenplay co-written by an uncredited Erich von Stroheim, it certainly promises to be interesting.

Barrymore stars as Sgt. Ivan Markov, stationed in a 1914 border garrison, who has ambitions to obtain a commission in the Russian army despite his peasant ancestry. The aristocrat officers scoff at his ambitions, but the General (George Fawcett) believes in his talents, considering him excellent on all counts. His daughter, Princess Tamara (Camilla Horn) also has an interest in him, though she too is unwilling to cross class lines. When he is at last successful in gaining a promotion to 1st lieutenant, Markov is shunned by the other officers. Spurned by Tamara and everyone else, he drinks too much at a party and ends up falling asleep in her bedroom, resulting not only in the loss of his rank but a sentence to five years at hard labor. But after war comes and the government falls, Markov finds himself in a position to take revenge, or possibly help Tamara and the General.

One of the more intriguing threads of this epic is that of a mysterious peddler (Boris de Fast), who starts off as a malevolent force talking of the coming revolution and warning Markov that his destiny lies not amongst the aristocrats, but the people. After the revolution, this peddler becomes a commissar with the power of life and death (mostly death). He presents a macabre, Mephistophelean figure, gaunt and sneering, while offering Markov temptation after temptation. For the first half of the movie, it's an open question as to whether he's even real or a figment of Markov's imagination. At the midway point, however, he proves all too real and determined to bring down the upper classes. He even has a rubber stamp for his death sentences.

Class is very much at the heart of Tempest; the superior attitude of the aristocrats in the first half is mirrored by their precipitous decline and the concomitant rise of the peddler and the convict to supreme power. While the Red Scares were still fresh in the filmmakers' memory, and the Communists are presented as bloodthirsty monsters, at the same time it's quite apparent that the aristocracy richly deserves all the hell being heaped upon it in the second half. There are plenty of opportunities for them to be kind or even decent in the first half, and only the old General manages to do so, in his patronage of young Markov. But Tamara, who actually has affection for Markov, fatally rings the bell that will bring doom to his dreams as a result of her determination to keep the classes separate. Her fiancee, the Captain (Ullrich Haupt), a vicious martinet, gleefully goes along with it, exhibiting sadistic cruelties at every step of the way. The moment in which Markov holds the Captain's fate in his hands near the end is certainly a gripping one, and it's accomplished with panache.

The visuals of the picture are quite striking indeed, with opulent sets (production designer William Cameron Menzies won the first Oscar for this film). The lighting is often striking, with numerous key sequences executed in shadow or in silhouette. The prison sequences are appropriately harrowing, just as the scenes in palaces are impressive in their majesty. It's very solid in support of the storytelling. Director Sam Taylor moves the proceedings along briskly, and there's seldom a dull moment.

Barrymore is a shade on the hammy side, especially as Markov starts going mad in prison, but his ambitions and resentments come across the silent screen very well indeed. He doesn't have the best of chemistry with German actress Camilla Horn, though there's enough there to make the story work credibly. Louis Wolheim (who had co-starred with Barrymore in the 1920 Dr. Jekyll and Mr. Hyde) is a bit overbroad as Markov's faithful comic relief buddy, but he's memorable in a supporting role, especially in his ready adaptation to the privileges inherent in the revolutionary structure, fulfilling his own gluttony while death and destruction are rampant around him. Fawcett has a terrific face, enormous, blustery and evocative of upper-crust privilege. Ullrich Haupt's sadistic Captain looks like it was molded more than a little on contributor von Stroheim , and it's quite effective, if a little one-dimensional.

The transfer is a bit lacking, with weak black levels. The film is shot in a fairly soft focus (possibly to make Horn look younger, since in a few shots she has significant bags under her eyes), which makes it look a bit smeary, but on the whole it's not bad. The source print has regular wear with speckling throughout, but there are only a few instants of serious damage visible (worst of them being a ragged tear during a critical moment). William P. Perry contributes a somewhat repetitive piano score that is fairly hissy though decently bright. There are no extras, and the film only has six chapter stops.