An inventive, lyrical ode to creativity and an intimate examination of the artistic impulses of Australian-born musician and cultural icon Nick Cave. In their debut feature, directors Iain Forsyth and Jane Pollard fuse drama and documentary, weaving a staged day in Cave's life with never-before-seen verite observations of his creative cycle.

On Blu-ray and DVD on November 18th

The adventurous life and creative process of Renaissance man of rock Nick Cave are revealed in the exhilarating 20,000 Days on Earth

. The award-winning film, which has received a remarkable, near-perfect rating of 97% on Rotten Tomatoes, comes to Blu-ray and DVD on November 18, 2014, from Drafthouse Films, in conjunction with Cinedigm (NASDAQ: CIDM). Both the Blu-ray and the DVD are loaded with extra features and have SRPs, respectively, of $29.23 and $24.99. 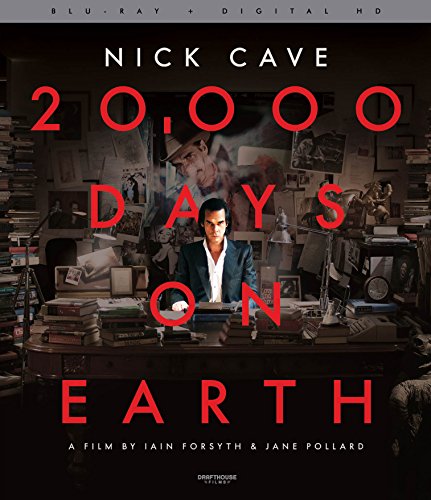 is an inventive, lyrical ode to creativity and an intimate examination of the artistic impulses of Australian-born musician and cultural icon Nick Cave. In their debut feature, directors Iain Forsyth and Jane Pollard fuse drama and documentary, weaving a staged day in Cave's life with never-before-seen verite observations of his creative cycle. It features those who have affected his life, including wry tales from the road shared with his regular collaborator, the multi-instrumentalist Warren Ellis; actor and friend Ray Winstone; and Kylie Minogue, who shared a duet with Cave in the breakout hit "Where the Wild Roses Grow." These voices from the past revisit Cave in daydream-like scenes as he sits behind the wheel, driving through his adopted hometown of Brighton, England.

Neither an outright music documentary nor a concert film, 20,000 Days on Earth

nevertheless contains electrifying performances. Audiences see a song grow from the tiniest of ideas to an epic performance at the Sydney Opera House. Cave also opens up to a psychoanalyst as he discusses how his early years continue to inform his work, and journeys through his memories via mementos from his personal archive. This category-defying film pushes the form into new territory, exploring universal themes about artistry and celebrating the transformative power of the creative spirit.

A writer and performer of emotionally intense and lyrically bold songs, Nick Cave has been making music for more than 40 years. He has written and published more than 250 songs as the lead singer of the Birthday Party, Nick Cave and the Bad Seeds and Grinderman. He's also an acclaimed film score composer, screenwriter, novelist and occasional actor.

"It's right up there with the best rock documentaries. That is, if you can call it a documentary." - SAN FRANCISCO CHRONICLE

Iain Forsyth and Jane Pollard have worked extensively with Cave on various projects over the past seven years and know him well. Cave says, "I've always liked their unorthodox approach to things and on a personal level we have always gotten on very well. I invited them into La Fabrique Studios to film some promotional footage for [the 2013 album] Push the Sky Away. As it turned out, in the end, they shot everything and the studio footage was so compelling we decided to expand the idea."

The film has received widespread acclaim from critics. Michael O'Sullivan of The Washington Post said, "For the uninitiated, it offers a demonstration of what is so mesmerizing about this performer, who is by, his own description, 'a kind of ostentatious bastard.' " Ray Pride of Newcity wrote, "This bold, unique gem is bright, funny, brooding, hopeful, momentarily visionary, a wounded beauty exploring the creative process in a fresh and oft-brilliant fashion." It's "a documentary clothed in the robes of a dream," praised Daniel Walber of Nonfics. Joe Gross of the Austin American-Statesman wrote, "Visual artists and first-time feature directors Iain Forsyth and Jane Pollard have given [the film] a potent mix of the raw and the cooked."

was an Official Selection at numerous film festivals in 2014, including Sundance (where it won for Best Directing and Best Editing), Berlin, San Francisco, New Directors/New Films and the Full Frame Documentary Film Festival.

Special Features on the 20,000 Days on Earth release will include:
* Making-of featurette
* Nearly 1 hour of deleted and extended scenes
* 14-page booklet with interviews with the filmmakers and Nick Cave

About Drafthouse Films
Drafthouse Films, the film distribution arm of the Alamo Drafthouse Cinema, is a curated brand of provocative, visionary and artfully unusual films new and old from around the world. Following the earnestly simple motto of "sharing the films we love with widest audience possible," Drafthouse Films debuted in 2010 with the theatrical release of Four Lions which was named of Time Magazine's "Top 10 Films Of The Year." The 2012 release slate includes the acclaimed Best Foreign Language Oscar(R)) Bullhead, the internationally celebrated Danish comedy Klown (currently slated for a Warner Bros/Todd Phillips produced US remake), Cannes Film Festival 2013 Official Selection The Congress starring Robin Wright, Harvey Keitel and Jon Hamm, the 40th anniversary restoration of landmark Australian thriller Wake In Fright, the Werner Herzog/Errol Morris produced documentary The Act Of Killing and British auteur Ben Wheatley's psychedelic trip into magic and madness A Field In England. Drafthouse Films distributes films theatrically, through home video, VOD and their direct-to-consumer platforms integrating into the ever-growing Alamo Drafthouse entertainment lifestyle brand, which along with the Alamo Drafthouse Cinemas includes: Mondo, the collectible art boutique; Fantastic Fest, the largest international genre film festival in the US; and the pop culture website Badass Digest.