PR: Zombeavers on DVD May 19

Three college girls (Rachel Melvin, Cortney Palm, Lexi Atkins) who go on a carefree vacation of drinking games, topless sunbathing, and sexual exploration. Their frolicking fun comes to an abrupt end when toxic zombie beavers try to eat them. Writer and comedian Jordan Rubin directed from a script he wrote with Jon Kaplan and Al Kaplan.

Gnawing Its Way to DVD from Freestyle Digital Media

is coming to DVD May 19th, 2015, following its day and date release in March of this year. 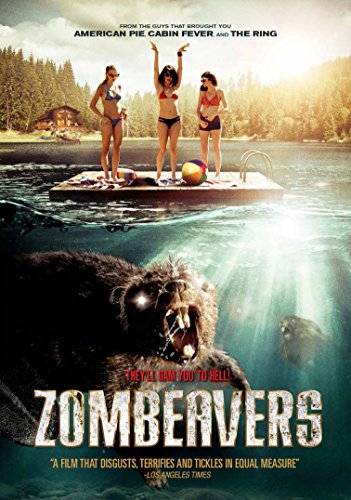 follows three college girls who go on a carefree vacation of drinking games, topless sunbathing, and sexual exploration. Their frolicking fun comes to an abrupt end when toxic zombie beavers try to eat them.

gained a following this past year with high profile screenings at Stiges, London Screamfest, the 2014 Tribeca Film Festival and the Fantasia International Film Festival.

Says director Rubin, "Is this film a festival darling that's making a beeline for the Oscars? Sure. But it also isn't afraid to confront some of the bigger issues, like zombies and beavers."

About Freestyle Digital Media
Freestyle Digital Media, LLC was launched in November 2011 by CEO Susan Jackson, Co-President and founder of independent theatrical distributor Freestyle Releasing, LLC and North American sales company Turtles Crossing, LLC, and by Freestyle Releasing co-founder Mark Borde. Freestyle Digital Media supplies quality commercial film and TV content directly to all US VOD/SVOD rental DVD/Kiosks and theaters using the latest cloud-based technologies to automate digital workflow. Freestyle's goal is to provide fresh, well-marketed product and stay on the cutting edge of the ever-compressing windows to ensure that their partners benefit from a platform that delivers an anytime-anywhere capability in the medium of their choice and a positive digital viewing experience on any device in any location.