Miranda (Rosamund Pike) is a dedicated nurse, an exquisite cake maker and an impeccable friend. But when she agrees to a blind date and the wrong man comes to her door...her perfect world is shattered by a brutal assault. The film is directed by Fouad Mikati (Operation: End Game) and features Shiloh Fernandez, Nick Nolte, Camryn Manheim, Rumor Willis & Illeana Douglas. 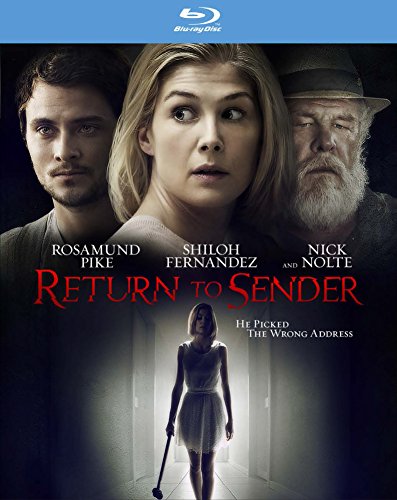 Miranda (Academy Award nominee Rosamund Pike, Gone Girl) is a dedicated nurse, an exquisite cake maker and an impeccable friend. But when she agrees to a blind date and the wrong man comes to her door...her perfect world is shattered by a brutal assault. Even after her attacker, William (Shiloh Fernandez, Evil Dead), is convicted and locked away for the crime, Miranda can't overcome the fear and trauma enough to put her orderly life back together. Desperate for closure, she reaches out to William - first through letters, then prison visits - and slowly builds a relationship with him. But when William is paroled and comes looking for her, Miranda seizes the opportunity to exact revenge.

About RLJ Entertainment
RLJ Entertainment, Inc. (NASDAQ: RLJE) is a premier independent owner, developer, licensee, and distributor of entertainment content and programming in primarily North America, the United Kingdom, and Australia. RLJE is a leader in numerous genres including feature films and urban with distinct content via its owned and distributed brands such as Acorn (British TV), Image (feature films), Acacia (fitness), Athena (documentaries), and Madacy (gift sets). These titles are distributed in multiple formats including broadcast television (including satellite and cable), theatrical and non-theatrical, DVD, Blu-Ray, digital download, and digital streaming.

Through Acorn Productions, its UK production arm, RLJE owns all rights to the hit UK mystery series Foyle's War and is developing new programs. RLJE owns 64% of Agatha Christie Limited, which manages the intellectual property and publishing rights to some of the greatest works of mystery fiction, including stories of the iconic sleuths Miss Marple and Poirot.

RLJE leverages its management experience to acquire, distribute and monetize existing and original content for its many distribution channels, including its branded digital subscription channels, Acorn TV, Acacia TV, and UMC - Urban Movie Channel, and engages distinct audiences with programming that appeals directly to their unique viewing interests. Through its proprietary e-commerce web sites and print catalogs for the Acorn and Acacia brands, RLJE has direct contacts and billing relationships with millions of consumers. For more information, please visit www.RLJEntertainment.com.