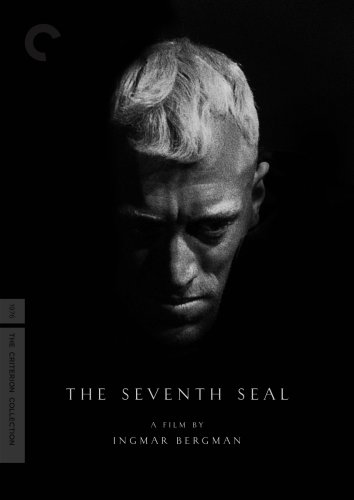 "I've been to Atlantic City a hundred times, I've never seen Death walking on the beach."—Steve Guttenberg in Diner

If ever there were a fool's errand on dOc, it's reviewing a release like this one, an exercise set up to make me look like a moron ("It's got a good beat, you can dance to it, I give it a 92"), a contrarian ("This movie SUCKS") or a pompous jackass (well, pretty much anything in the seemingly infinite amount of critical writing that has preceded me). It's hard to consider the movie without all of the received wisdom that comes with it—its reputation precedes it, either as an icon of cinematic existentialism, or at least as a punch line, with the figure of Death marauding the shore.

What's kind of refreshing, watching it on this sumptuously produced DVD set, is to see how shortchanged Bergman has been by his austere reputation. His movies are shot through with severity; he's the great cinematic master of loneliness. But The Seventh Seal has great vital sequences with crowds and tableaux—he's severe, sure, but also vital and full of empathy as well, both for his characters and for his audience. It's a film of extraordinary juxtapositions as well, for instance when a merry band of clowns has their performance interrupted by a parade of flagellants, inflicting punishment on themselves because God is too busy to do so.

We don't always think of the Middle Ages as fertile territory for filmmaking, but the deeply spiritual aspects of this story come out of that dark time, and Bergman pays homage to the art of the period. The most famous image of the movie undoubtedly is of Death walking on the beach, looking for his next inevitable victim—what you may not have known before this picture is that Death apparently cares for parlor games. Max von Sydow, Bergman's leading man of choice, plays a noble warrior on the Crusades called Antonius, who, knowing of Death's reputation, challenges Death to a game of chess, with Antonius's soul being the bet. The movie brims deliberately with metaphors, and we understand that Antonius can stave off his opponent, for a while, anyway, but that this is a game he cannot and will not win.

But you shortchange yourself and the movie if all you hold onto is the image of Death on the beach. It's a movie in which religion is very practical, tactile, and present, where death isn't just a spooky fellow on the other side of the board but a daily presence in a world of pestilence and plague. It's also, in many significant respects, a horror movie, with Death as the ultimate serial killer. He's a creative one, too, and Bergman finds ever more byzantine ways for him to collect souls. (The most graphic of these may be Death methodically sawing down a tree with a vulnerable inhabitant figuring it's a prank.)

Criterion revisits one of their earliest releases with this two-disc set—we even get to revisit those days long ago and far away before DVD, when Criterion produced gorgeous though insanely expensive laserdisc sets. In the extras package, your tolerance for Peter Cowie may be tested: he provides a commentary (from the 1987 laserdisc release), a new afterword (10m:05s), and on the second disc, a primer on the director, Bergman 101, which he narrates over film stills. Cowie is a bright man and at his best when discussing his personal relationship with the film, which made him want to be a critic; less successful is his commentary track, which frequently offers little more than narration.

Still more Cowie on the first disc, in audio interviews (19m:48s) he conducts with Von Sydow; the most illuminating piece here, though, may be from Bergman's most famous fan. It's a short produced in 1998 for TCM by Woody Allen, a gallop through Bergman's career, and its influence on Allen's own work. Disc One also sports a trailer; the main event on Disc Two is Bergman Island, a three-part, feature-length 2004 look at the director. And the highlight of the accompanying booklet is a sharp essay on the film by Gary Giddins.