ěWhy donít you let it cool down until morning? Iíll keep you plenty warm until then.î - Lana Lewis (Jody Thompson) 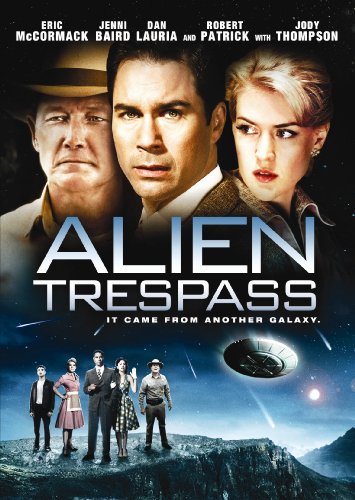 This is a promising-looking homage to old-school sci-fi movies, with an interesting cast to boot.

Ah, the joys of 1950ís B-moviesÖa genre that is as timeless as it is ultra-cheesy. That era in cinematic history brought us the likes of The Blob and Them!, but it apparently almost brought us Alien Trespass, a sci-fi film produced in 1957 by Goldstone Pictures, and purported to be the greatest of its kind ever made. Of course, there was never a Goldstone Pictures, nor was there a film called Alien Trespass that was lost, let alone made, but such an idea makes for a great premise. That premise was realized in 2009, when ěrealî director R.W. Goodwin (helmer of numerous X-Files episodes) filmed this supposed lost content. Release in a limited number of theaters in the Spring of 2009, Alien Trespass now gets a shot at a larger audience of 50ís B-Movie buffs thanks to Image Entertainmentís new Blu-ray release.

We start with a Newsreel that tells us, among other things about the fact that a new movie, Alien Trespass, has been lost, with all of the prints and negatives supposedly being destroyed. Now, a construction crew has uncovered a metal box containing the one remaining print, which we soon view in its entirety. Its story takes place during 1957 in the town of Mojave during a meteor shower. Heralded astronomer Ted Lewis (Eric McCormack) and his wife, Lana (Jody Thompson) see something much larger than most meteors crash in a nearby field. Ever the curious, Ted goes to investigate the crash and returns the next day, seeming not quite himself. It turns out that Ted has had his body taken over by an alien named Urp, whose mission is to defend Earth against the evil, Ghota. Ted/Urp eventually teams up with the very human, lovely local waitress Tammy (Jenni Baird) to fight this alien before it takes over the world.

Iím sure there are die-hard fans of schlocky B-movies who will gravitate towards, and even embrace Alien Trespass, but I couldnít fight that feeling that this was a missed opportunity. R.W. Goodwin has essentially taken everything he enjoys about these movies and gives us a 90-minute ěcover versionî of the best elements they have to offer. Trespass might have been more interesting if Goodwin had stood this subgenre on its ear, infusing some original, new ideas into such a familiar setting and story. Why not add some more modern touches and create a sort of B-movie/modern sci-fi mash-up? Still, while the resulting film simply might not work for me, Goodwin deserves plenty of credit for infusing every element he could to make this as realistic of a 50ís B-Movie as possible.

The cast does a fine job capturing the essence of the finest actors to work in this genre. Robert Patrick does a great job as the too-creepy-for-this-movie law enforcement office, but his total screen time is almost laughable. Eric McCormack hasnít gotten enough work in his post-Will & Grace career, and in Alien Trespass, he reminds us why that needs to change immediately. Thompson is a walking exercise in sexiness, but Jenni Baird is the best of the bunch, stealing many a scene from McCormack. Granted, she shares scenes with him while heís in ěUrp mode,î but she is brilliant at all times. Imageís Blu-ray release is technically brilliant, with excellent audio and video presentations. The extras collection is nice as well, with a handful of featurettes on board, including a fun, fake news segment featuring Eric McCormack as himself.