Jack Bauer: By the way, that stunt you pulled back at the car. If you ever pull your weapon on me again, you better intend to use it.
Renee Walker: I did. - Kiefer Sutherland, Annie Wersching 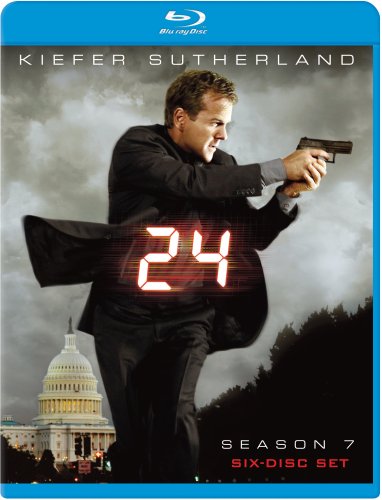 Jack Bauer returns for the seventh worst day of his life, complete with terrorist attacks, double-crosses and personal vendettas. But after six previous seasons, does Day 7 manage to keep things fresh?

I often credit 24 as being the show that restored my faith in network television. Watching my favorite shows be thwarted time and time again at the hands of that silly Nielsen Ratings system, I threw my hands up in disgust sometime in the mid-90s, vowing never to return again to the drudgery of network programming. The loss of such favorites as Twin Peaks, The Adventures of Brisco Country, Jr. and Profit had left me bitter and disillusioned. And while Iķm being just a tad overdramatic, I wasnķt compelled to watch anything on television until I started seeing the promos for Keifer Sutherlandķs latest project sometime during the summer of 2001.

24 seemed like it could distinguish itself from the rest of the banality rotting tv sets around the country and, to my delight, it more than exceeded my expectations. Every episode was more thrilling than the last and, this being the first and possibly only season, there was no telling who was going to make it out alive. The twists were unlike anything seen on TV before, only to be outdone by the suspense. As every episode reached its ticking clock conclusion, Iķd sit back in my chair and take a deep breath. Then another. Yep, the damn show knew how to play its audience and I loved every second of it.

I was sure it would get cancelled.

It didnķt, though. To my surprise, it returned for a second season, then a third and a fourth, with viewership rising with each passing year. Before I knew what happened, 24 was a bona fide phenomenon and Kiefer Sutherland had planted his feet firmly amidst the television landscape, creating one of the most iconic characters of all time: the invincible Jack Bauer. Hell yeah!

But the trouble with 24 has always been in its narrative structure. The ģreal timeī gimmick, so innovative in its first year, quickly turned into a proverbial achilles heel. The entire story must unfold in a twenty-four hour time span, which can lead to some astoundingly large leaps of faith on the part of the viewer. And while the show tried really hard to ėtopķ season one, the twists and turns grew more and more unlikely during the subsequent seasons. Thatķs not to infer the show lost its footing, it maintained itself remarkably well through many of the following years, only to flounder with the debacle that was season six. A year stuffed with plot devices and endgames that had already been recycled once or twice in the showķs history. It was a stagnating year that many felt heralded the beginning of the end of 24 (myself included).

Thankfully, the writerķs strike - and subsequent year hiatus - seems have replenished many of the creative juices necessary to get Jack Bauer into the thick of combat. As impossible as it seemed, 24 performed the comeback of the ages during its seventh season. With a change in venue (from LA to Washington D.C.), the lack of CTU, and the introduction of several new characters, our day opens with Bauer excused from a congressional hearing to help contain another looming terrorist threat.

I know what youķre thinking: ģSounds like every other season of 24! Yes and no. The series has accrued more than a few mainstays that the producers are unwilling to abandon: Bauer kicks a lot of ass, plows his way through more bureaucratic opposition than the last six years combined and, ultimately, saves the day in the end. Along the way there are traitors in our midst, shadowy character motivations and lots and lots of door kicking. Theyķre all characteristics intrinsic of the show and to shun the seventh year for adhering to these elements is a bit nonsensical.

The series lives and dies by its twists and turns, so to spoil them in a review would be counter-productive. My job is to help people decide whether or not to watch it, not spoil everything along the way. Iķll refrain from leaking story details and paint my praise with broad strokes. Season sevenķs most notable addition is FBI Agent Renee Walker (Annie Wersching). The wide-eyed agent finds herself responsible for Bauer throughout much of the dayķs action and their relations are arguably the lynchpin for this yearķs success. On a character level, Agent Walker is Bauerķs polar opposite and her adherence to protocol is unquestionable ń at first. Being that a lot can happen in twenty-four hours, however, Renee finds out that you canķt always play by the book when the villains have already shredded every page. Itķs a fantastic part and Annie Wersching handles the conflicted nature of the character expertly.

Weķre also presented with the much needed return of Carlos Bernard as Tony Almedia. Itķs always great seeing this guy around and he gets the chance to do some of his best work throughout season sevenķs duration. Weķre never sure where Almediaķs allegiances lie this year, and the actor keeps us guessing as much as the writers do. If the relationship between Jack and Agent Walker is the core of season seven, Tony Almedia's return is the smooth and buttery frosting on an already delicious cake.

Itķs true that even in this much-improved year, 24 continues to be dammed by its premise. Kiefer Sutherlandķs Bauer has become arguably the most successful television hero of all time and, as a result, weķve stopped fearing for his safety. I remember being uncertain of his fate during the first two seasons, but his continued survival is essentially a done deal time and time again. Which brings us neatly to the next issue: those closest to Jack are in the gravest of danger anytime, anyplace. Since the showķs producers canķt kill Bauer, theyķve lined his loved ones in their sights. Itķs one way to keep things interesting, but another problem is that we come to like the supporting cast (sometimes as much as Jack) so much that it often feels like a cheat to see them killed off continuously.

At the end of the showķs seventh year, itķs still an adrenaline rush. Additionally, thereķs a mini two-parter mid-season that is quite possibly the most exciting and suspenseful set-piece in the showķs history. You probably already know whether or not this show is worth your time but, rest assured, 24 is back with a vengeance and Iķm already counting the days until season eight.

VIDEO:
So let's talk about 1080p 24! Having watched the show during it's seasonal run, I'll admit that I did not watch these episodes from start to finish. I did, however, mine every commentary on the disc and sample every episode that did not offer one. It's definitely good to have the show on Blu-ray, and I look forward to back-filling my collection when Fox decides to get the ball rolling. But I'll admit, not everything was as I expected concerning this release.

Most importantly, this is the best you've seen the show look. I've been watching the show in HD for the past three years, but the Blu-ray's image trumps it with ease. The show is shot with a "run and gun" documentary look, consisting of frequent camera zoom ins and outs, erratic pans and sweeps (resulting in the presence of noise). As a result, the image quality on this disc isn't necessarily the most detailed and picture-perfect one on the market. But that's in line with the desired visual look.

But if the detail isn't as sharp as say, Lost (a totally different show with a very different visual style), it offers a solid palette of colors and some of the most outstanding black levels I've had the pleasure of seeing. A good chunk of the show takes place at night (and a lot of daytime scenes are set in dark buildings) and blacks are always rich and detailed. If I can't quite say Fox has given us a flawless transfer, it's still a very nice one. 24 fanatics should be more than happy with the show's Blu-ray debut. I was.

AUDIO:
Oh yes. The DTS-HD 5.1 track will knock you flat. Audio is perfectly rendered here. Dialogue levels are consistent, never losing ground to the frequent bursts of action. Rear-channel speakers are always participating in the action, too - be it dialogue or gunfire. It's all got a fantastic kick to it. If you're looking for something to really show off your new audio setup, this will put a smile on your face. Absolutely awesome.

EXTRAS:
The real strength in this set's supplementary material is with the twelve commentary tracks spread across the season. Unfortunately, Kiefer Sutherland doesn't participate (why is it so difficult to lock the main star down for these things?) but he's just about the only one. The tracks see participation from producers Howard Gordon, Evan Katz, David Furey and directors Brad Turner and Jon Cassar. On the talent side of things we get to hear Carlos Bernard, Annie Wersching, Mary Lynn Rajskub, James Morrison, Glenn Morshower, Tony Todd and Bob Gunton. Good stuff all around, funny and informative.

Once we move past the commentaries, the extras are quite sparse. First up, composer Sean Callery explores the music of 24 in a 13-minute featurette. A collection of so-so deleted scenes runs nearly thirty minutes. Next there's a fluffy 'making of' that covers the whole season in 16 minutes and is little more than a promotional piece. Lastly, there's an in-depth look at episode which I won't get into here due to its 'spoilery' nature.

CONCLUSION:
Fox has decided the time is right for 24 to hit Blu-ray and they've chosen one of its best seasons to boot. I love how quickly they release this to Blu-ray (the day after the season finale) and hope other shows continue this trend. While the show's formula is growing ever-stale, the cast and crew manage to creat rip-roaring entertainment anyway. With good video and superb audio, this is a must have for fans of the series and a hearty recommendation from this big time Jack Bauer fan.