"People say one thing and do the other. It's just all bullshit. Don't waste words. Just best not to say anything." - 451 (Lawrence Taylor) 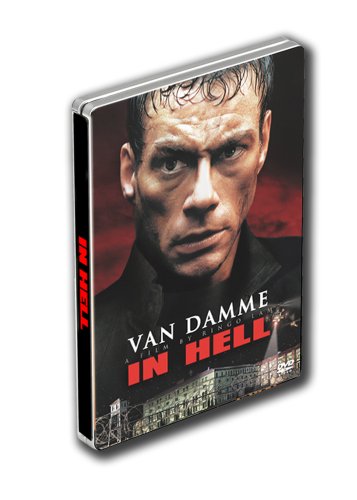 Van Damme finds himself wrongfully imprisoned for the murder of his wife. All the more shocking, Paul W.S. Anderson seems to have stolen large chunks of this for his crappy Death Race remake.

One of these days, someone is going to make an action film set in prison where our hero isnĒt a good man who was unjustly framed or wrongly incarcerated. IN HELL almost eschews these conventions by having our hero convicted for a vigilante murder. I say almost because the film goes out of its way to heap droves of pity upon Van Damme's everyman. There's lots of flashbacks to his married life and several lingering sequences of his mental anguish just to remind us of how badly Van Damme was shafted.

So, before you can say ļformulaicĒ, Kyle Le Blanc (Van Damme) finds himself locked up in a brutal Russian prison where heĒs forced by the corrupt warden to partake in a series of bone crunching brawls with some real tough guys. Luckily, Le Blanc is a bit of a brawler himself and is able to hold his ground against a cast of undesirables.

It may be a tad hypocritical of me, the slasher film enthusiast, to start harping on a film for bringing clich╚s to the table. ItĒs just that IN HELL adheres to them so closely youĒd think there was some kind of playbook or something. But what really surprised me about this sucker is that itĒs also a decent movie. For one thing, Van Damme makes for a pretty amiable everyman. HeĒs not an ex-martial artist here, just a regular guy who, conveniently, is pretty good at beating ass. Once confined, itĒs not like he reverts to his martial arts moves to subdue his foes, instead thereĒs some pretty intense fisticuffs on display. Furthermore, Van Damme turns in a rock solid performance here as the grief-stricken husband haunted to the loss of his wife. Granted, it's not an Oscar-caliber performance, but he shows more range here than I ever thought he was capable of.

Director Ringo Lam deserves some credit for keeping things fast-paced and gritty. The prison setting is one of the skunkiest youĒll see and the cast on inmates largely look like the filmmakers drudged them out of the depths of a Russian sewer. Very scummy. As with any good prison movie there's also a healthy dose of inmate brutality and prison rape (naturally). It all adds to the discomfort of the viewer while heightening the severity of Le BlancĒs situation. If anything, the filmmakers were nothing but up-front with the title of their film. IN HELL indeed.

To be perfectly honest, IĒve never been a huge fan of Van Damme. IĒve always preferred Steven Seagal (c'mon Out for Justice is amazing), but after watching this one, IĒll have to reconsider. He's got a better screen presence than I remember from his late 80s stuff and he can pull off the drama, too. IN HELL isn't terribly memorable, but you could do a lot worse if you're looking for a way to kill 90 minutes.

VIDEO: Not good. First Look's DVD features a terribly soft image loaded with bleeding colors, jagged edges and a washed out picture. This isn't the most visually appealing movie out there, but there's no excuse for this poor master.

AUDIO: The 5.1 surround track is a bit of a cheat as it appears to be largely front-channel loaded. In fact, aside from some discreet background noise, very little came through the rear-channel speakers. Dialogue is clear, but the action lacks 'pop'. Not an awful track, but severely lacking in 5 channel audio.

The 'Making Of' is nothing special. Running just north of 15 minutes, it's a fluffy promotional piece that features some brief interviews with the cast and crew. Nothing terrible interesting here.