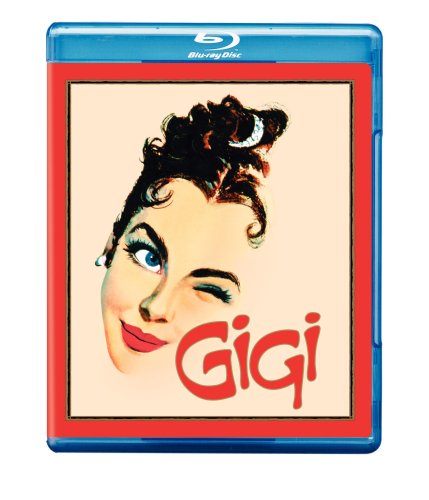 After going my whole life without seeing this Best Picture Oscar winner, it took Warner's Blu-ray release for me to finally give it a chance.

Until now, my only knowledge of Gigi stemmed from my Stepfather having told me through the years how great it was. Now, thanks to WarnerĒs new Blu-ray disc of the film, IĒm intimately acquainted with this classic, 1958 Technicolor musical. Based on the novella of the same name by French author Sidonie-Gabrielle Colette, director Vincente Minnelli, the man responsible for the great films, An American in Paris, Brigadoon, Kismet, Lust for Life, and a daughter named Liza, adapted Gigi as an all-out musical that remained true to the source story. His film went on to win nine Academy Awards, including Best Director, Best Adapted Screenplay, and the mother lode, Best Picture. Now, Warner is finally making this cinema classic available on Blu-ray in a fine, single-disc edition.

Gigi brings us into the rose-colored world of Gilberte (Leslie Caron), or ņGigiŅ for short. She is in training to become a Parisian escort thanks to the teachings of her Grandmother, Madame Alvarez (Hermione Gingold) and Aunt Alicia (Isabel Jeans). Gigi is oblivious as to everything that goes along with being an ņescort,Ņ but, nonetheless, she soon finds herself falling for a rich man named Gaston (Louis Jourdan). HeĒs just getting over a bitter end to an affair with Liane dĒExelmans (Eva Gabor), which has made him even more of a public gossip subject than before. Gaston is soon harboring similar feelings for Gigi, and, amid the resulting confusion, she is forced to grow up much faster than she ever anticipated.

While this song might have been a bit less creepy back in 1958, the first musical number is Chevalier singing ņThank Heaven for Little Girls.Ņ Such a song would never be allowed in a modern musical, especially one adapted into a movie, but, given what transpires in the rest of the film, it works splendidly as a way to get this classic started. From there, weĒre treated to hilarious, light-hearted banter between Gigi and Gaston for much of the film, with unforgettable musical numbers strewn in-between. There are tunes that will stick with you for days, even years after experiencing them for the first time, and youĒre sure to be humming at least a few of them when you wake up the next morning.

Ah, Louis Jourdan, an actor who haunted me as a youngster growing up and watching Swamp Thing on pay-cable over and over again. Until finally seeing Gigi recently, I had no idea that Jourdan was more than a schlocky B- movie actor that can play a mean villain who can turn into a sword-wielding mutant monster with relative ease. Ok, so thatĒs not entirely true, as I am very aware that Mr. Jourdan was an accomplished actor for more than 50 years. In Gigi, he shows nothing less than pure professionalism, embodying Gaston in as realistic a manner as possible, despite the fact that heĒs asked to break into song multiple times.

The crux of the film, and the key to its effect on us is CaronĒs timeless performance. While I (and assumedly many, many others through the years) found her to be a chipper, cheery breath of fresh air throughout, I can see how some could be instantly turned off by her seemingly undefeatable spirit that she exhibits at the start. Still, if she captured your attention in a positive manner from the get-go, youĒll see that CaronĒs Gigi is one of the most engaging, loveable characters in cinematic history. WarnerĒs Blu-ray disc features a stellar widescreen video presentation as well as a lossless Dolby TrueHD audio mix, which allows the musical numbers to burst across the sound field like never before. The disc also features some great extras, including an audio commentary track and a new documentary about the filmĒs production. Kudos to Warner for pulling out all of the stops for one of their most respected catalog titles.