Kill them all! - Spartacus (Andy Whitfield) 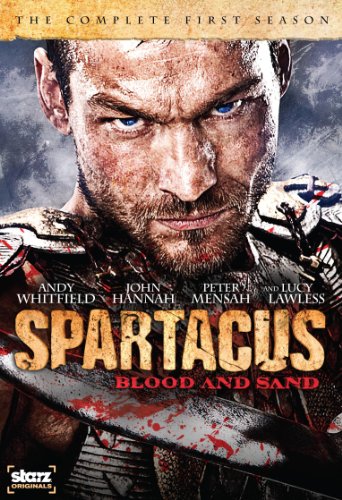 The story of Spartacus has been told many times for many reasons. This newest version, Spartacus: Blood and Sand which first aired on STARZ, is a potent mix of violence, sex and intrigue. A high-powered cast, innovative technology and solid writing has wired together one of the most entertaining historical action series ever.

Spartacus was a gladiator in ancient Rome who led a slave revolt that succeeded in terrorizing the empire for several years. His story has been characterized in many ways, often not very true to history. Our sources in any case are mostly Roman, including Plutarch, and even in that day, the whole affair was propagandized for political purposes. The politicization of the Spartacus story continued with author Howard Fast wrote and published his version of the story in 1951 in response to his own imprisonment during the McCarthy era. In the 1960 version of Spartacus directed by Stanley Kubrick and starring Kirk Douglas, scenes of violence had to be trimmed from the final film, including battle carnage and graphic crucifixion. Sexuality had to be toned down with a nude Jean Simmons covered cleverly while in a swimming scene and references to oysters and snails snipped from a bathing scene involving the Roman leader Crassus and his slave, Antoninus. Politics carried over as Douglas, doubling as producer, hired blacklisted writer Dalton Trumbo to write the screenplay and ultimately contributed to breaking the blacklist by giving him a screen credit in his own name. The recent television mini-series, Spartacus, based on the same Howard Fast novel, filmed in Bulgaria, and starring Goran Višnjić and Rhona Mitra showed more brutality and sexuality, in that kind-of-dumbed-down TV-movie fashion, but there was something passionless about the whole enterprise and politics played a much small role as subtext to the straightforward historical fiction.

On the other hand, the new version of the Spartacus story, subtitled Blood and Sand, is a very distinct departure from the style and substance of the previous "sword and sandal" versions of the legendary gladiator tale. This version includes over-the-top levels of violence and gore, very mature levels of sexuality and a bucket full of profanity. The show has features some of the roughest scenes I have ever seen on television. The cinematography captures the currently popular graphic novel style with elan and is similar to the movie 300, where the heightened reality adds significant potency to the action scenes. I had seen the announcement of the series and did not start watching the series at first. My brother mentioned it as a "must watch" and I found that to be the truth. The show is great fun and definitely will be very entertaining for some... but also not for everyone. Frankly the content is just too graphic for more sensitive viewers with copious amounts of blood and gore, along blood imagery.

That being said, word of mount got around and created an energized fan-following that has given the show a very successful first season run on the STARZ. the word came out that Welsh-born actor Andy Whitfield, who plays Spartacus, was diagnosed with treatable Stage 1 non-Hodgkin lymphoma during a routine checkup. However, Whitfield has recently been declared to be clear of cancer and has completed his treatment. [UPDATE] Starz network says is leaving the show to battle a recurrence of cancer. To keep the Spartacus fires burning, producer Steven DeKnight has expanded a previous planned flashback espisode into a six-part prequel called Gods of the Arena that will air on STARZ in January. Lucretia (Lucy Lawless) and Batiatus (John Hannah) return in the story of the rise of the House of Batiatus and its gladiators before the arrival of Spartacus as a slave. Other returning actors include Peter Mensah (Doctore), Manu Bennett (Crixus), Antonio Te Maioho (Barca), Nick E. Tarabay (Ashur), Lesley-Ann Brandt (Naevia), among others. New characters join the mix, including the gladiators who preceded Spartacus and Crixus at the House of Batiatus.

The episodes and extras come on four discs in an attractive package that could very nicely sit on a shelf with books. Each of the first three discs contains four episodes and the finale is found with the extras on disc four.

The Red Serpent was the series premiere and begins the story of Thracian warrior Spartacus and his fellow fighters, who align themselves with Rome to protect their homeland. Betrayal by the Romans and Legatus Glaber leads to a rebellion and the Thracians desert the Roman army to return to protect their villages. Spartacus and the other deserters are captured by the Romans taken to the arena in Capua to publicly be put to death by gladiators. Second episode, Sacramentum Gladiatorum shows a now enslaved Spartacus begin training to fight as a gladiator. Many of the characters who will drive the story over the coming episodes are introduced and the nature of the life the slaves and their masters live is explored. Crixus, the undefeated Gaul and instant antagonist of Spartacus, is the champion, Doctore is the head of trainsing and Varro is a fellow recruit, who has become a gladiator to pay off debts. Spartacus's owner is the crafty Batiatus, head of the ludus and husband to Lucretia. Spartacus must pass the test to become a gladiator.The third episode, Legends, Spartacus maneuvers to fight in the featured match of the festival before he is ready. In parallel we begin to see some of the story lines that are simmering beneath the surface. The show now has developed a pattern of developing a confrontation during the episode leading to a "fight of the week." But there is an interesting twist in this episode.

Batiatus drives the fourth episode, called The Thing in the Pit. His punishment for Spartacus is force the Thracian to fight in the "pits of the underworld," This episode is quite an eye-opener for various reasons. Back at the ludus for episode five, Shadow Games, Spartacus and Crixus must learn to fight as a team and take on a legendary champion. Meanwhile, a financially strapped Batiatus receives an opportunity of a lifetime that involved his battling band of gladiators. This episode also features an awesome and welcome battle sequence.

Episode six, called Delicate Things, starts a phase that focuses on the inner life of the ludus marked by lies, distrust and duplicity. The seventh episode, Great and Unfortunate Things, continues the changes that are wrought inside the ludus by the schemes and betrayals. Mark of the Brotherhood and Whore, episodes eight and nine, feature some new recruits and some things that are very surprising as the sexuality of the gladiators moves to the forefront.

Episode ten Party Favors begins the march to the finale followed by eleven Old Wounds, twelve Revelations, and an "enhanced" version of the finale Kill Them All. I will not give much synopsis here because the twisted schemes and their unraveling with the resulting violence and chaos, are potent action drama and deserve to be watched as fresh as possible. Ultimately, this is not your father's Spartacus. A couple of the fight sequences are just riveting and the complex schemes and devastating in their reveals.

The commentaries are pretty typical fare with quite a bit of jocularity and self-congratlution, but occasionally amusing. The extras explore some interesting and some not so interesting aspects of the production. Spartacus: Blood and Sand - Behind the Scenes, Sparacus: Battle Royale, Gladiator Boot Camp, Grime & Punishment, Andy Gets Plastered, Legend Re-imagined, Oh, Those Randy Romans, Shooting Green: The Shadow of Death, and Exposing Your Ludus and a trailer.