ěI see what I see, and I know what I know. But nobody believes me.î - Granny (Naima Wifstrand) 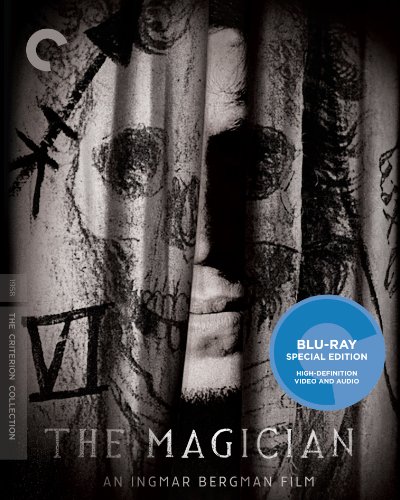 Another of the great Ingmar Bergman's classics makes its way to Blu-ray, and it primarily needs to be seen for Max von Sydow's wonderful performance. The Criterion Collection offers it in the best way possible, with amazing extras to boot.

When referencing masterful director Ingmar Bergman, the first films that instantly come to mind are The Seventh Seal and Wild Strawberries, among others. One of his at least slightly-lesser-known gems is 1958ís The Magician, a rather low key film that winds up telling a much fuller, multi-layered story than it appears it will upon viewing the first act. Featuring stalwart Bergman actor, Max von Sydow, The Magician instantly became my second favorite Bergman film (behind The Seventh Seal) instantly after this, my initial viewing of it. Like so many of Bergmanís finest efforts, thereís a huge touch of fantasy here, but, whether we witness actual fantastical occurrences or if everything is smoke and mirrors is something that Iíll leave for you to discover for yourself. Fortunately, The Criterion Collection makes such a discovery an amazing experience, as their new Blu-ray disc release of the film looks and sounds fantastic, with some excellent extras magically appearing as well.

We first meet Albert Emanuel Vogler (Max von Sydow) as heís travelling with his small troupe of assistants, having apparently just left one town, and on the verge of arriving at another. This troupe consists of Voglerís assistant, Mr. Amari (Ingrid Thulin), whoís not exactly who he seems to be, Granny (Naima Wifstrand) a witchy woman who spends most of her time collecting herbs to use in the ěpotionsî that they sell, the voice of the group, Tubal (Ake Fridell), and Simson (Lars Ekborg), who drives the stagecoach. Upon arriving at the site of their next ěshow,î the troupe is introduced and essentially interrogated by their hosts, Police Superintendent Starbeck (Toivo Pawlo), Minister of Health Dr. Vergerus (Gunnar Bjornstrand), and Consul Abraham Egerman (Erland Josephson). This trio of skeptics refuses to believe that Vogler is able to perform actual magic, and they arenít afraid to wear their skepticism on their sleeves, oftentimes taking their actions to life-threatening lengths.

About five minutes in, thereís little doubt that weíre watching a Bergman film. From the rather gloomy overall setting to the early death of Spegel (Bengt Ekrot), an actor Vogler finds in the forest, Bergman, again, shows off his masterful skills at mood setting. Once we feel this initial sense of dread, weíre taken to the initial ěinterrogationî scene, and weíre asked to shift our emotions in a different direction. Two questions arise from this sequence, both of which arenít really answered until the end of the film, with one of them arguably never fully answered at all. Does Vogler and co.ís ěshowî involve actual magic or is the entire thing rigged with wires, smoke, and mirrors? This is the mystery that drives the filmís plot, at least on the surface, and Bergman lets us in on the answer to this near the end, or at least it appears that he does. Thereís still plenty of ambiguity surround Voglerís magic once the film ends that repeat viewings are a given.

The second question involves the lengths at which Starbeck, Egerman, and especially Dr. Vergerus will go to expose Vogler for what they believe him to be: a total fraud. Bergman makes an interesting storytelling choice in answering this one, as he hits us hard and heavy with it as soon as the troupe arrives and then takes a major detour to focus on what appears to be the rather inactive sex lives of the current residents of the Egerman house. This sequence injects some humor into the proceedings as we see one of the maids, Sara (Bibi Andersson) let her inhibitions down, and Egermanís wife, Ottila (Gertrud Fridh) attempt to seduce Vogler. This light-hearted, often very sensual material turns out to be a brilliant part of the film, as it rather seamlessly bridges the serious, torch-bearing townspeople- esque material that dominates the first and last acts.

When all is said and done, The Magician is most memorable for the masterful performance of Max von Sydow. He is one of those rare actors that can give an award-worthy performance without saying much, if anything, and for the majority of this film, he literally says nothing. Through stark facial expressions and mannerisms, von Sydow embodies Vogler in a way that only he can pull off, coming across as both extremely intimidating and vulnerable, especially when the authenticity of his work is in question. There will never be an actor like Max von Sydow, and count The Magician among his essential performances. Such an essential performance is deserving of an essential Blu-ray disc, and, as always, The Criterion Collection just that. Deep blacks and amazing image detail are highlights of this High Definition transfer, which works in perfect conjunction to the lossless audio track. Add to that an extras collection that serve as a film class of sorts on The Magician, and we have a no-brainer of a purchase.