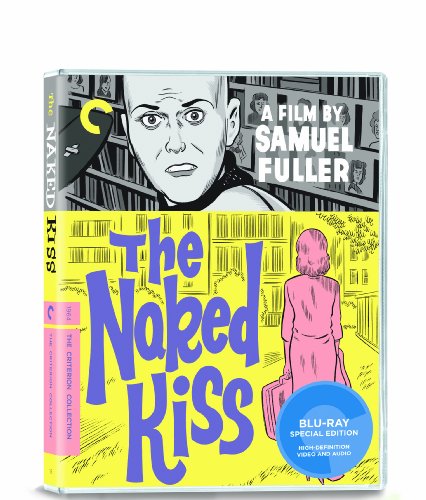 If you're of a certain bent, this movie is sure to be one of your favorites, and it was recommended to me by Martin Scorsese. (Yeah, Marty and I are very close.) Actually, when GoodFellas was released, an ingratiating interviewer said to him that his was the greatest opening of a movie of all time. Scorsese accepted the compliment graciously, but said, Oh, no, the greatest opening of a movie of all time is The Naked Kiss. Which of course made me immediately go out and track down a copy, and really, it couldn't be better: pissed off hooker batters her john with a shoe because he's drunk and can't pay up. The camera takes the john's P.O.V., getting battered and battered, then reaching for her&#8212and yanking off her wig, so now it's a completely bald, pissed off hooker smacking us around.

Really, what more could you want from a movie than that?

It's hard to imagine what 1964 audiences made of this kind of riotous assault, and in fact The Naked Kiss gets even loopier from there. Our heroine—we cut forward, so she's got a full set of hair—is Miss Kelly, who calls herself a traveling champagne saleswoman. She's a hooker in all but name, and everybody knows it—part of the great fun of a movie like this is watching the cranky auteur Samuel Fuller flaying the carcass of the dying Hays Code, damn near daring anybody in a position of authority to challenge him. It's overwrought to the point of being operatic, which means that even when the acting isn't very good (and that is often) it becomes sort of a house style, in which if you like it, that's fine, and if you don't, it's camp, and by the way, the hell with you too.

Kelly lands in Grantville, with her own deluded Miss Havisham as a landlady, a cop who buys her wares and understands her line of work, a local royal family (the Grants, of course), and an orthopaedic hospital for handicapped children&#8212all of which is a heady recipe for carnality thinly veiled, lots of sturm und drang, and the most inappropriate musical number in film history. You can see how wildly influential this has been&#8212David Lynch must be a particular fan, because the bad part of town on the other side of the river shows up pretty much verbatim in <i>Twin Peaks</i>, for instance&#8212and even <i>South Park</i> bears the imprint of some lunatic Fullerism. It's one of those movies that I don't want to summarize too much for you and deny you the pleasure&#8212and if you don't like it, you'll know right away, even before the credits roll, so if you're one of those, my sincere apologies. But truly, you don't know what you're missing. <br><br> Criterion's Blu-ray release of the title is a pip, a qualitative leap forward over their early DVD release, which was basically unadorned. Here, the transfer is kind of spectacular, probably better than any B movie of the period ever looked&#8212you realize that cinematographer Stanley Cortez is one of the unsung heroes of the project. And the disc is crammed with terrific extras, most of them focusing on Fuller. In a 2007 interview (28m:48s), Constance Towers, the picture of studied Hollywood elegance, reminisces about the project and her director, and then we get to see the man in his element. He's been honing his anecdotes for years, and we get to see the persona evolve. A 1967 French television clip, from <i>Cineastes de notre temps</i> (23m:31s), offers a portrait of the director, as does a 1983 piece from <i>The South Bank Show</i> (31m:05s), pegged to the release of <i>White Dog</i>. And then back across the Channel for Fuller in Grand Old Man mode, in 1987, on <i>Cin&eacute;ma cin&eacute;mas</i> (12m:50s)&#8212he's got great stories, and he loves telling them. Also on hand is an original trailer, a crackerjack essay in the accompanying booklet by Robert Polito, and a relevant excerpt from Fuller's memoirs. </p><p class="credit" align="right">Jon Danziger March 15, 2011, 1:01 pm</p></p></div> </div> </section> <footer><p class="foot"><a href="ducu.php">Home</a> | <a href="r-reviews.php">Review Vault</a> | <a href="r-inteviews.php">Interviews</a> | <a href="r-articles.php">Articles</a> | <a href="r-apps.php">Apps</a> | <a href="r-about.php">About</a> | <a href="mailto:webmaster@digitallyobsessed.com">Contact</a></p> <div id="botad" align="center"> </div> <div id="copyright">&copy; Copyright 1999-2019<div> </footer></div> <script type='text/javascript'>var _merchantSettings=_merchantSettings || [];_merchantSettings.push(['AT', '11l8pS']);(function(){var autolink=document.createElement('script');autolink.type='text/javascript';autolink.async=true; autolink.src= ('https:' == document.location.protocol) ? 'https://autolinkmaker.itunes.apple.com/js/itunes_autolinkmaker.js' : 'http://autolinkmaker.itunes.apple.com/js/itunes_autolinkmaker.js';var s=document.getElementsByTagName('script')[0];s.parentNode.insertBefore(autolink, s);})();</script> </body> <script>'undefined'=== typeof _trfq || (window._trfq = []);'undefined'=== typeof _trfd && (window._trfd=[]),_trfd.push({'tccl.baseHost':'secureserver.net'},{'ap':'cpsh'},{'server':'p3plcpnl0694'},{'dcenter':'p3'},{'cp_id':'808962'}) // Monitoring performance to make your website faster. If you want to opt-out, please contact web hosting support.</script><script src='https://img1.wsimg.com/traffic-assets/js/tccl.min.js'></script></html>