“You know what I like about you? You’re so…normal.” - Trish (Allison Janney) 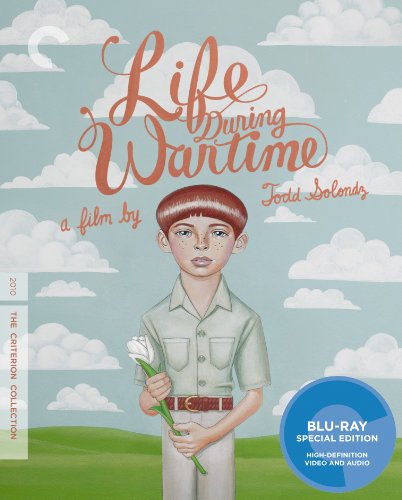 This brilliant follow-up to Solondz's masterpiece, Happiness is nearly half the running time of that film, but packs just as much punch. Plus, it sure doesn't hurt that it's being released by the Criterion Collection.

Director Todd Solondz had a breakthrough on the independent film circuit with his 1995 flick Welcome to the Dollhouse. While that film caused a minor stir thanks to some controversial subject matter, the controversy meter practically broke upon the release of his follow-up movie, Happiness, from 1998. There actually wasn’t much of its 2+ hours that didn’t push some kind of envelope, but everything was handled in such a compelling way, that critics heaped large amounts of praise upon the film. After what many considered a pair of missteps (Storytelling and Palindromes), Solondz more than found his footing in 2009’s Life During Wartime. Essentially a sequel to Happiness, Solondz brings his amazing originality and freshness to even the tired concept of a sequel, and has crafted an amazing, character-driven tale that is even receiving the Criterion Collection Blu-ray treatment; not exactly commonplace for such a recent film.

Single-mom, Trish (Allison Janney) has a son named Timmy (Dylan Riley Snyder), who is preparing for his upcoming bar mitzvah, while she’s busy dating Harvey (Michael Lerner), who can’t quite get the whole love making thing down pat anymore. Trish, herself, hasn’t had sex since her husband, Bill (Ciarŕn Hinds) went to jail for being a pedophile. Unbeknownst to Trish, Bill has just been released from jail, and is already on the dating scene, meeting the beautiful, yet strange Jacqueline (Charlotte Rampling) at a bar. Trish’s sister, Joy (Shirley Henderson) is married to a former convict named Allen (Michael Kenneth Williams), but she’s still hung up on her former boyfriend Andy (Paul Reubens), whose ghost she still sees years after he killed himself. These lives are all intertwined, along with Trish and Joy’s other sister, Helen (Ally Sheedy), who is a successful Hollywood screenwriter that can’t even come close to getting her personal life in order.

If these characters’ names, and general lots in life sound familiar it’s because most of them are the exact same people we met in Happiness. Of course, the twist is that Solondz has entirely recast them for this sequel, and, at worst, (perhaps inadvertently?) crafting the idea that such a practice should become more commonplace in the tired old world of sequels. Then again, smart, thought-provoking gems like Life During Wartime are far different animals than junk like the Transformers flicks and other Hollywood franchises, so such an original idea would simply never work, let alone get green-lit to begin with. Still, it definitely works here, and, even better, it isn’t long before we forget the gimmick entirely, as we’re far too wrapped up in the enthralling story and the actual characters, themselves, to even remember Solondz’s casting ploy.

Still, while the story is so great on its own terms, it would be a total misstep on my part to not praise the cast of Life During Wartime. It all starts with Janney’s portrayal of Trish. As an actor more known for her TV work (The West Wing) than her feature film appearances, Janney really shines here, making a character who is extremely difficult to like (as are all of them, actually), at least somewhat sympathetic. Everyone else is great here as well, with Paul Reubens and Ciarŕn Hinds really standing out, but the real power is Todd Solondz’s amazing screenplay. Virtually every character has his or her numerous issues in dealing with society as a whole, and virtually none of them are easy to connect to in a traditional sense, but, amazingly, we’re still sucked into their miserable lives and what the future might hold for them. At times it seems like they can even sense this disconnect, while in no way ever even coming close to breaking the proverbial “4th Wall” that can, and has ruined a film in the past. Ironically, adding to their dreary lives is the overly bright, always sunny Florida setting. While you would think, such a thing would have the opposite effect on a film’s mood, here, it only enhances their sorry lots in life, and is an integral part in the effectiveness of Solondz’s film.

This little-seen masterpiece finally gets its Home Video due in the form of this Criterion Collection Blu-ray release. For starters, the film looks simply outstanding! Shot using the RED One Digital Camera, the 1.78:1 1080p transfer is virtually flawless. The colors are absolutely gorgeous, seamlessly blending with crisp images, and excellent handling of black and contrast levels throughout. The DTS-HD Master Audio 5.1 track, mastered at 24-bit from the original digital audio master, is also fantastic. This is a dialogue-heavy film, and the actors’ speech is always crystal clear, but there are also opportunities for the entire sound field to come to life, and when it does, the mix really shines. As far as extras go, this is another excellent effort from Criterion, albeit one that (fortunately) stresses quality over quantity. Along with another great booklet, we get a question and answer session with Todd Solondz, and a collection of cast and crew interviews, all of which provide great, candid, personal insight into the making of this unforgettable film.